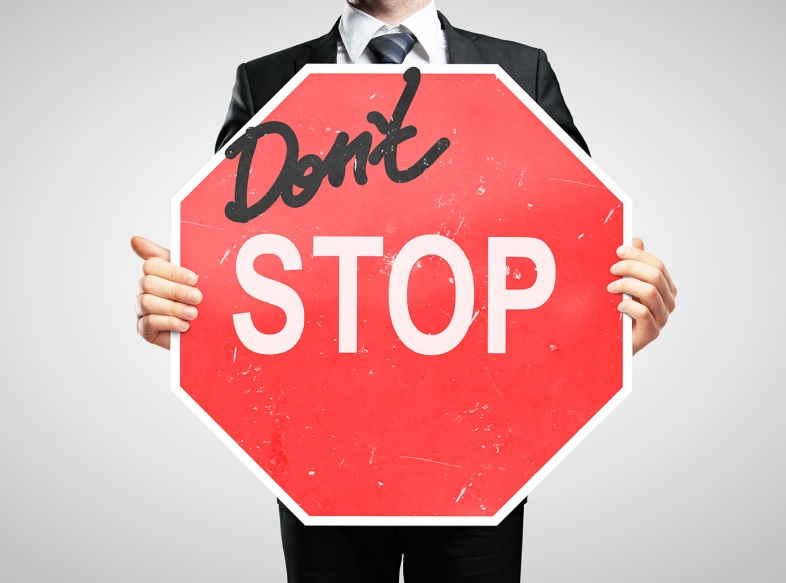 Perhaps the best advice I ever received: Don’t stop.

Churchill made famous the phrase, “Never give up!” But when I say Don’t stop, I am not referring to the importance of persevering. Though being determined, unrelenting and persistent are all exceedingly important, I’m going to ask you to focus on something even more important.

And focus certainly is key.

When I coach people on this topic, one question I always ask is, ‘What do you want?’ In one phone consultation with a woman in her late sixties, I asked her this simple question and she immediately said that she wants to stop getting cheated on. Gulp. There’s a lot of pain in that desire. I asked, “What else do you want?”

She finally said, “I want lots of things, but wanting to not be cheated on any more is my main focus.”

I asked, “Are you sure that is your main focus?”

“The truth,” I said, “is that you either really do want to be cheated on because there’s some payoff in it for you, or you are confused as to what you really want.”

I went on to explain to her that when I asked her what she wants, she identified something that she says she does not want. She even clarified, insisting that not getting cheated on is her main focus.

The secret to turning things around is to get clear on what you really want. And then don’t stop pursuing it. Focus on what you want, not what you do not want.

The coaching client I described above really got this and ‘owned’ it very quickly. We were able to shift her focus away from not being cheated on and, instead, train her to focus upon what she really wanted:

To be someone whose strengths are attractive to an equally strong, quality individual

By being very clear in her own heart and mind about what she really wanted, she began to make very clear – without ever having to say it out loud – what she would never again tolerate in a relationship.

Once she got into the habit of cultivating those things – the things she really does want more of – she didn’t need me anymore!

How do you stop doing what doesn’t work? Find out what you want. Focus on that. Act on that. And don’t stop.