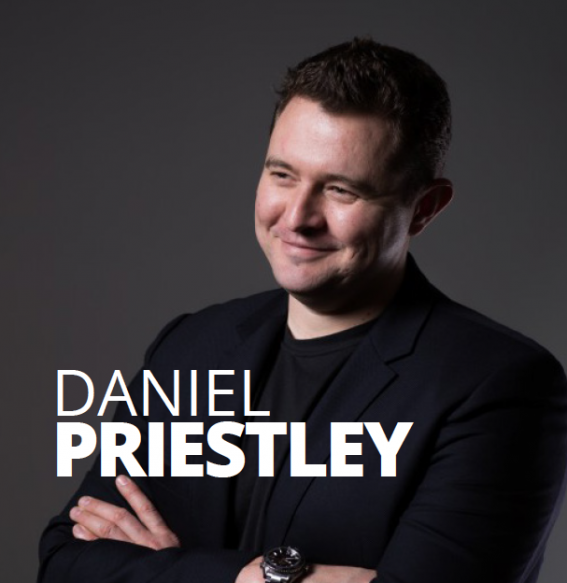 Bernardo Moya meets Daniel Priestley, who made his first million at the age of 22, was in charge of a national company at the tender age of 25, and now advises businesses worldwide, accelerating their growth and delivering brilliant observations and practical help to take them to the next level of development

From the very beginning, growing up on the Sunshine Coast in Australia, Daniel Priestley had a talent for making money. “I was ten years old,” he tells me.

“My mom accidentally set fire to the kitchen and damaged all sorts of things. They were going to throw them all out, but I negotiated the right to sell them in a garage sale. I put an ad in the paper, I cleaned all this stuff up, put it on tables, got it all ready for selling and then went round to all the neighbours and did 50/50 joint ventures with them to sell their stuff in my garage sale. So yeah I had a bit of an interesting sort of early on entrepreneur experience there!”

That even included working at McDonald’s. “That was part of my entrepreneurial journey.  I was learning systems and procedures and structure and business at McDonalds and I was learning all those sort of topics during school.”

For Priestley it was full-on personal development from early on. “At about ten or 11 years old I was watching a music TV show and on came a guy called Tony Robbins with an infomercial and he was this big loud American with lots of people talking about how they were super successful. I remember going halves with my Dad to buy the CDs. I did the 30 days Personal Power course when I was probably 12 years old.”

Priestley’s positive attitude took him next to business school.

“I was profoundly disappointed,” he tells me.

“I had heard of Steve Jobs going and lecturing at Harvard. I thought I’d be coming in contact on a regular basis with industry leaders and business people. I went through each of my subjects and found that every single one of my business lecturers had never run a business, never owned a business, never started a business. They’d mainly either had a career in the world of academia or they’d been in a consulting firm or a big four accounting firm, but none of them had actually been entrepreneurs.”

However, one positive came when he was given an assignment to identify a need and market it. He realised that there were many 15–17 year olds who had nothing to do, so he ran a dance night for them.

“We ended up with a thousand kids at ten bucks a head. All the costs were covered, we had radio sponsors and retail sponsors. That was one of my first out there in the real world business opportunities.”

After running six parties, Priestley decided to work directly under entrepreneurs and dropped out of university. Instead, he worked in direct marketing for two years, receiving great advice from business leaders and learning how to sell things effectively.

At 22, he set up his own event management business, Triumphant Events. He sold high ticket items worth thousands of dollars that were supported with a powerful presentation. He got expert speakers to promote the items. Within a year he and his partners had made a million dollars of sales. “By the time we were 25, we ended up with a national business generating sales of ten million dollars.”

But then it was time to change. Having built up an over-reliance on one company, they had to scale right back after a fall-out with them.

At this point, the three friends who’d built the business decided it was time to go their own ways and travel. But Priestley wasn’t one to rest on his laurels.

“I got an opportunity to do a launch marketing campaign for someone in London so I thought you know what I’m just going to live in London for a year or two and do some event marketing over there. Launch Triumphant Events UK and see how we go, um, so that was nine years ago and I’ve been here ever since.”

Over time, the business changed its model, with Priestley helping other business to accelerate their growth, getting powerful speakers and experts to give advice on growth.

It was a great model, but when the credit crunch hit, he found people were not spending money at all. It was then he realised he didn’t need to hire in other speakers.

“I thought, you know what, I actually know what I’m looking for when I want someone to be a key person of influence at an event – I’m going to fill those shoes. I’m gonna write my own book, create my own content, tell my story. Up until that point I’d never really shared much of what I had going on – I was always bringing big international people to London or finding authors. I said actually you know what? I’m in a position myself as a key person of influence. That was the beginning of a very different journey.”

He is now connected with 1,750 businesses around the globe, giving advice and talks to six and seven-figure turnover business.

Being so widely connected means that he sees the same patterns of challenge and growth occurring in companies around the world as they expand and grow. His programme for growth is based on what he calls the Five P’s.

The first P is Pitching.

He addresses a business team’s ability to pitch the business effectively. “In a social pitching or a scheduled pitching environment people need to be able to pitch their business with clarity and authority and be able to articulate the problem they solve, among other things,” he says.

The next P is Publishing.

“Every business needs to be looking at what published content sits around the business and then push themselves to write about their industry and write about their clients so that they’re finding and discovering intellectual property and insights.”

“We take the insights the owner or business has and turn them into new products. Most businesses are under-productised so they are focused on one or two products and they need to really develop four products at least. Normally businesses take off when they have hit the fourth product.”

The programme then raises the

Finally, comes the work on

If they’re partnering with big companies they become more stable, more solid and bigger. If they partner with celebrities they get a celebrity halo effect around the business.

So if you can partner with the type of companies whose speed you’d like to move at, then that’s a powerful way to build a business.”