Code In a Day: An interview with John Ridpath

Home Code In a Day: An interview with John Ridpath 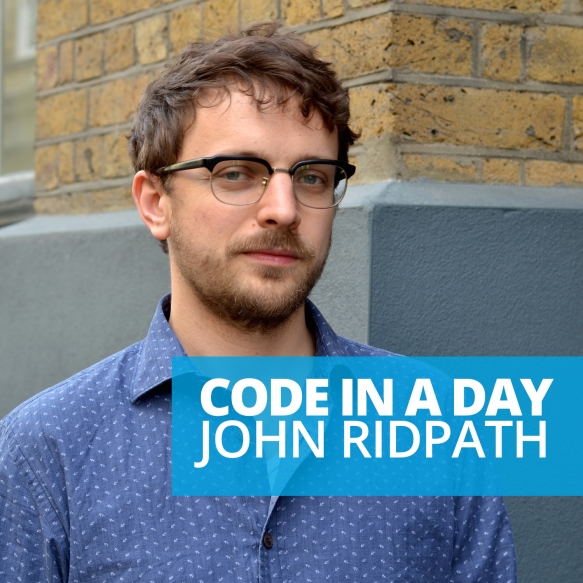 There’s a new craze in the world of computer programme development – people are learning computer programming in a single day. We thought that this must be impossible, so we did some investigation and spoke to John Ridpath from Decoded about why it’s not.

For our less tech savvy readers: Could you give a brief explanation of what coding is and why it’s necessary?

Back in the industrial revolution, textile manufacturers realised that they could create a single loom that can weave an infinite number of patterns by feeding it different punch cards. This idea of having one machine able to do lots of different things is the fundamental idea behind code and programming. If you want to create anything digital, someone is going to at some point have to write code (similar to the loom’s punch cards) to make it all possible. Back in the day, we used to have to write code into a computer to make it do things. We’re at a point now where we can click and drag on desktops, or swipe and multi-touch on mobile devices.

There is always a shortage of coders on the job market. Why do you think it is that there aren’t more people taking advantage of this open job market?

More specifically, there’s always a shortage of good coders. There are lots of people around who can sort of dabble in these things but the really talented ones are hard to come by. When you get a talented developer they tend to get sucked into the big corporations – the Googles, the Facebooks and the Spotifies; or they start up their own things. For many traditional companies or small start-ups, it can be tough to find the best talent. There is a bit of a resurgence in people trying to learn how to code and there are many online courses now.

The notion of learning to code in day is impossible. Explain why it’s not.

This is something that we’ve had flak before from developers who kind of hear about us and say, it’s not possible, you can’t possibly kind of train someone to be a skilled software developer in a day. And course we don’t think that you can turn someone into one of these super skilled developers in a single day. What we do think we can do though is provide a really kind of super charged introduction and overview to the digital world in a single day. And through that you build your own app in a day, and obviously we’re there to sort of guide you through the process.

Learning coding is akin to learning a new language. People have said in online testimonies that you speak their language when teaching a course. How do you translate that information?

Decoded has four co-founders – Catherine Parsons and Richard Peters, who had worked together previously at Ogilvy, and then had their own agency. Then Steve Henry who set up HHDL the sort of controversial agency who created things like the Pot Noodle You Slag advert and You’ve Been Tango’d thing that caused this massive controversy; and then Alastair Blackwell who was a developer at Coda. It is interesting that kind of balance, three people from a non technical background, and one from a technical background. We’re not a bunch of developers who’ve tried to set up shop teaching people these skills. We’ve always had in mind the kind of people who will actually come on our course are the people who’ve created it. We’re really, really strict that the people who come through are hugely talented technically speaking but also are able to communicate with humans, and there’s a huge stock placed in patience. This sort of reminds me of I was always quite good at school and then I went to do a driving test and I was suddenly really bad and it was very kind of like shocking to have you kind of, feel stupid. And I think a lot of people come on our course who are insanely intelligent people working within different businesses that suddenly have this, you’ve got this potential to feel stupid. And so it’s very important for us to be patient because they’re not stupid, they’re trying to learn something quite a different way of thinking.

For more information on how to Code in a Day, visit: http://decoded.co