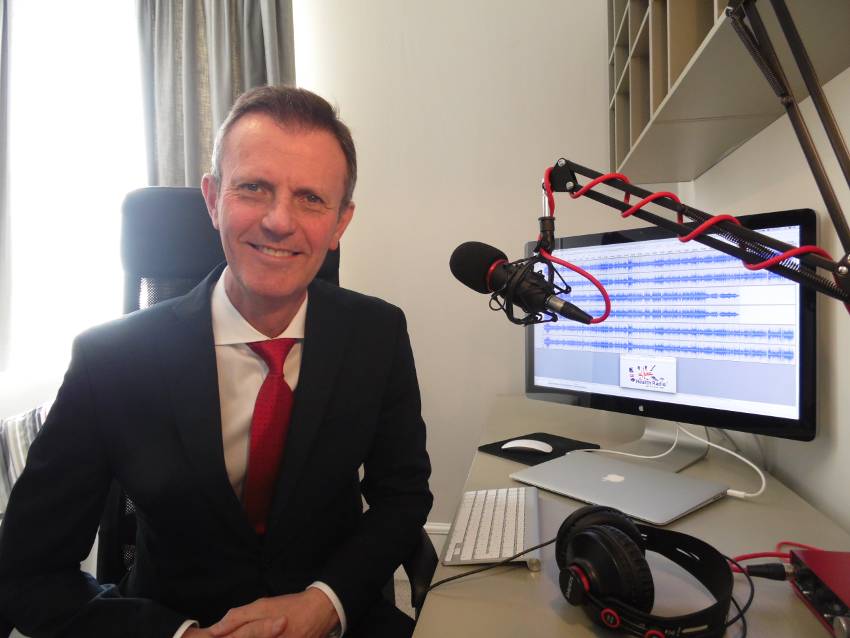 Johann Ilgenfritz reveals how he beat cancer by overhauling his life

I’d been working as a fashion photographer for 20 years when, at the age of 46, I had a heart attack on the tennis court. Then a few months later, in June 2011, I was diagnosed with cancer.

This was just two and a half years after my youngest son was born, and I was in total disbelief. I had white skin cancer, which grows under the skin and is one of the most aggressive types of cancer there is. When it finally sunk in what followed was shock, sadness, anger, and thousands of other emotions that I had never experienced before. Turmoil or perhaps chaos is the best way to describe it.

My wife Raphaela’s first reaction was to say “as usual you always have to overdo everything,” but of course, she promised to be there to help however she could, and she did.

I started radiotherapy and found it odd that my only duty was to be there for treatment. There was nothing else I was advised to do; I was not part of the process at all. In October of the same year, I was given the all-clear and even though I still had this funny feeling of “there should be something I should be doing,” life went on as always.

In February 2012, during my first trimonthly check-up, I was told the cancer had returned with a vengeance and had spread to one eye and my organs. I was given just 12 months to live.

That is when my journey actually started. Up to then I was just a passenger, but given that prognosis I decided to fight my cancer, and everyone else’s cancer as well. For the first time in my life, I made the conscious decision not to die.

The internet is the place everyone tells you to avoid at such times, but I had no other option and began researching the illness extensively.

One morning at 2:00 am I read something that would change the course of my life. I read an article about a German biochemist called Dr. Otto Warburg and his groundbreaking discoveries about the mechanisms of cancer. Amongst his findings was that cancer cannot survive in an oxygenated alkaline cellular environment. Apparently, this was nothing new, he had won the Nobel Prize in medicine for his work in 1931. I woke my wife and told her I’d finally found my lifeline.

This information took my breath away, as I knew I had finally found a way to be part of the process. I immediately started researching, and as I learnt we started to implement what I was learning. As a first step, I became a vegetarian, and then a vegan. My wife Raphaela and eldest son followed out of solidarity (they are both still vegan). Just three weeks into the diet change I felt a difference; and incredible surge in energy that had been lacking for a long time. I then went further to become an alkaline vegan.

I believe that if you change your lifestyle you can achieve good health. It is not only true that you are what you eat – you are also what you think. I realised that cancer was not the cause of my illness; it was only a symptom of an already sick body. It was caused by my lifestyle and diet. I now know that only around 10% of all cancer related illnesses are genetically inherited, which leaves approximately 90% which can be contributed to lifestyle. The top two causes are nutrition and toxicity overload, which includes stress that can turn your body acidic. You cannot eradicate stress, you have to learn how to manage it.

I knew if I could change the cause I would be changing the effect. This experience was the birth of an idea, the birth of UK Health Radio. I wanted and still want, to make quality health information accessible to everyone in one place. UK Health Radio does not favour natural health or mainstream health, and instead features both side by side, with the intention not to provoke, but rather to inform.

I now have a huge work load. I start work at 4:00 am and work until 7:00 pm, six days a week. But, I don’t tire and I have loads of creative and physical energy.

UK Health Radio has a very clear purpose and this is to inform and encourage people to take responsibility for their own health. This does not mean taking your health into your own hands, but to be part of the process of attaining and keeping your health freedom.

Even today, I am still optimising my diet all the time, and I have truly never felt better. I really hope that I can help others on their journey to good health.