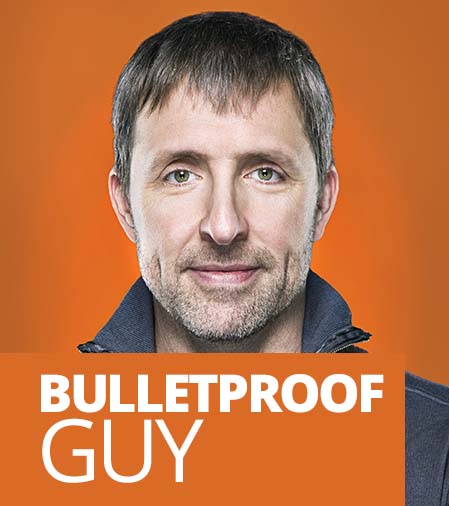 Dave Asprey, founder of Bulletproof Coffee, enhances people’s performance through biohacking – simple changes to your food, thinking and exercise that help you lose weight and find peak performance. Dave spent $300,000 on experimenting on himself with biohacks from around the world and combined the best into the Bulletproof philosophy. His special blend of coffee is specially formulated to enhance brainpower, but, Dave tells The Best You, there’s far more to Bulletproof than beverages

When I was 12 years old I read an article about venture capital and thought it was the coolest thing. I was already fat. I had autoimmune conditions like arthritis in my knees at 14. By my mid-20s I was becoming a successful businessperson but I didn’t feel good most of the time. I bought disability insurance in my mid-20s, just because I felt like I was working as hard as I could and could barely keep it together. So, I started looking around and saying: maybe it wasn’t me, maybe it was the environment I was in or the techniques I was using. That motivated me to understand biohacking – how to change things, do things that worked and measure what worked. I took what worked and applied it to my own biology.

I found I could lose half the weight I needed to lose just by modifying what I ate. I stopped eating gluten and cut down on sugar. Even though I was still eating the same number of calories, suddenly my body composition shifted and my personality changed. I thought, “Wow, this is big!”

Eventually, I became president and then chairman of an anti-aging research group called the Silicone Valley Health Institute. I was learning from all these world experts who’d studied not just how biology works, but what you do with biology to make people younger, stronger and faster. I realised the things that help rejuvenate people when they’re 70 years old also have profound performance effects on people who are 25 or 35. I started doing those things for myself, and found I really did perform better and think better.

When you re-wire your body, you get more energy, you get more willpower – that’s the biggest benefit. When you’re done with getting more energy and more willpower that way, you get into re-wiring your mind. You change thought patterns, things that happen so automatically you don’t think about them. Then, when you go into an environment that would have previously caused a stress response, it doesn’t cause any positive or negative response. You have full awareness of the situation and you can choose how to respond, instead of unconsciously reacting.

That’s the whole idea of biohacking in a nutshell. You change the environment outside yourself, inside yourself and change your biology. My main goal is to give service to other people. I do this because I can remember what it was like when I was 16, and I had to keep buying bigger pants. I got stretch marks when I was 16! I really couldn’t pay attention, because I was eating foods that would turn my brain off. I look back at how much I struggled and I look at how unnecessary that was. And I realise that every time I share some of this amazing knowledge, a lot of which people just don’t know about, I look back and say: how many people who are in the same situation I was and who am I helping today?

There are so many people out there trying to sell a bunch of stuff, and that’s one of the reasons I give away my concepts. You don’t have to buy anything from me, and the concept stands by itself. You might also want to try some of this coffee, because it works. But I communicate the content in a meaningful way so people can say: alright, this content is real.

Bulletproof has just raised $9m through venture capital funding. We opened our first coffee shop in Santa Monica and are extending the number of products we have to help people. We’re expanding our international footprint to make it easier for people globally to get a hold of Bulletproof stuff. Bulletproof Radio, the podcast, is now #1 ranked in health and fitness most of the time, and we just signed a new distribution agreement, which should increase the number of listeners – there are 16m downloads we’ve had so far. Our first documentary, Mouldy has just come out, talking about indoor environmental mould, and how that’s affecting people’s quality of life, and they just don’t know it.

You know, not so long ago I got a photograph from a family saying, “Dave, here’s a picture of us 60 days ago, and here’s a picture of us now.” The family had two teenagers and two adults, and they’d handwritten this card for me with their photo. In the first picture their daughter was clearly obese – and I know what it’s like to be an obese teenager, it completely sucks! The next picture was of her two months later. Her skin was clear and she was normal body weight. That motivates me. I spent 10 years solving that problem, and she did it in 60 days from the knowledge I’m giving away for free.

That’s why I started doing this, because it’s not necessary to suffer and go through all that work I did. That’s Bulletproof, for you!

Find out more about Dave Asprey’s Bulletproof method and hear his podcasts at bulletproofexec.com