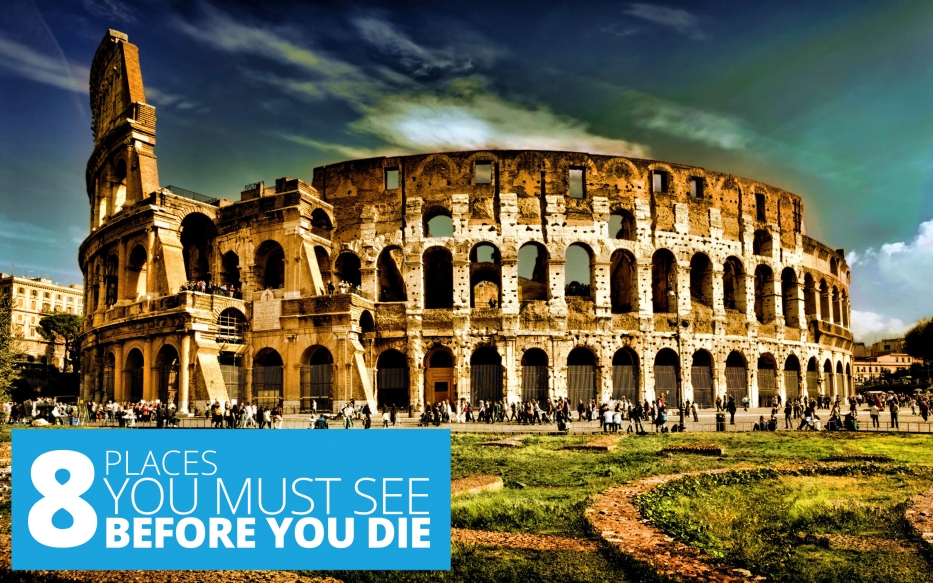 This issue we are starting a regular column – the “Bucket List” column. Every month we will feature eight things to do before you die. And we’re kicking off (excuse the pun) with a classic – places to visit.

There are so many fantastic places to visit on this beautiful planet. It would be difficult to choose a top 100, so getting it down to eight is practically impossible. So, just to give you fair warning, we will definitely be featuring more articles on top eight places to visit. Our strategy is to break it up into categories, such as top eight cities you have to see, or top eight places you have to see because they are just plain weird. But to start off, we’re keeping it pretty classic – Wonders of the World. We know that there are only seven official ones, but we’ve added an honorary one that we think is worthy. Do you know which one it is (without using Google)?

Number one: The Great Wall of China

Part of the reason the Great Wall of China was built was to protect the Chinese Empire or its prototypical states against nomads and warlike forces. The building of the wall began as early as the 7th century BC and is 13,170.69 miles long.

Fun fact: Contrary to popular belief, it cannot be seen from the moon without aid.

Established as early as 312 BC as the capital city of the Nabataeans, Petra is Jordan’s most-visited tourist attraction. The site remained unknown to the Western world until 1812, when Swiss explorer Johann Ludwig Burckhardt introduced it.

Fun fact: The Bedouin, who used to use it for target practice, damaged carvings on the treasury.

Considered the largest Art Deco statue in the world and the fifth largest statue of Jesus in the world. It is 98 feet tall, not including 26 foot pedestal, and its arms stretch 92 feet wide.

Fun fact: Christ the Redeemer statue was built exclusively on the money donated by the Catholic community of Brazil.

It was built by the Incas around 1450 as an official site for the Inca rulers, but abandoned it a century later at the time of the Spanish Conquest. It was unknown to the outside world outside Peru before being brought to international attention in 1911 by the American historian Hiram Bingham.

Fun fact: Archaeologists found ruins of palaces, temples, fortresses and even stone aqueducts that supplied water to the city.

The site shows many architectural styles, reminiscent of styles seen in central Mexico. This was once thought to have been an indication of direct migration or even conquest from central Mexico, but now this is seen as the result of cultural diffusion.

Fun fact: Visitors are no longer allowed to climb the stairs of the Castillo in order to better preserve the monument.

Number six: The Colosseum in Rome

The Colosseum is situated just east of the Roman Forum. Construction began under the emperor Vespasian in 70 AD,and was completed in 80 AD under his successor and heir, Titus. The Colosseum seated 50,000 spectators,and was used for gladiatorial contests and other public spectacles.

Fun fact: The Ancient Romans would flood the Colosseum and have miniature ship and navel battles inside.

It was built by Mughal emperor Shah Jahan in memory of his third wife, Mumtaz Mahal. The Taj Mahal is widely recognized as “the jewel of Muslim art in India and one of the universally admired masterpieces of the world’s heritage”. The construction began around 1632 and was completed around 1653, employing thousands of artisans and craftsmen.

FUN FACT: Legend has it that Shah Jahan had planned to construct another Taj Mahal in black marble on the other side of the river, but the war with his sons interrupted his plans.

FUN FACT: The mortar used is of an unknown origin. It has been analyzed and its chemical composition is known but it can’t be reproduced. It is stronger than the stone and still holding up today.