8 Great Foods To Taste And Savour by David Saunderson

Home 8 Great Foods To Taste And Savour by David Saunderson 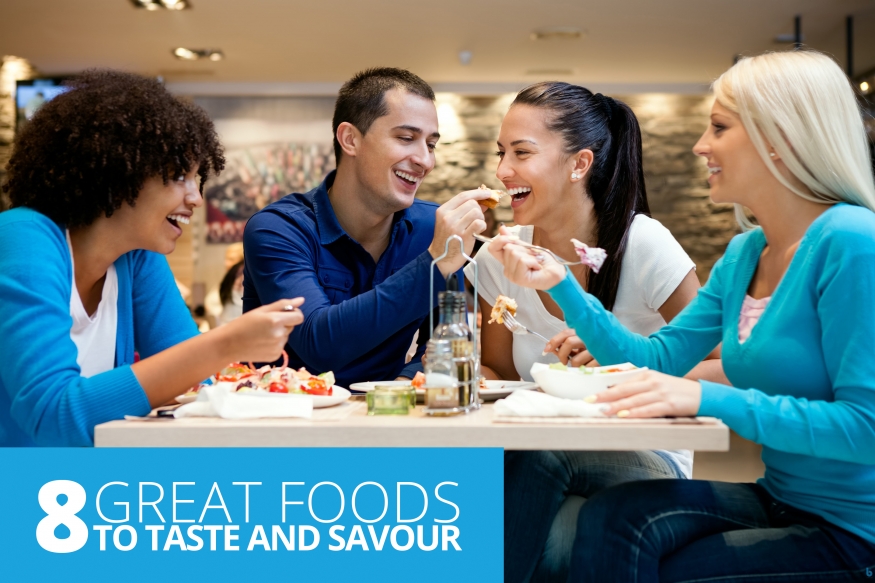 Part of enjoying life is living for the moment, so don’t wait until you’re on your deathbed before you make a list of what you should’ve done. Life is happening now, so start ticking things off that bucket list.

The world is full of amazing foods, from the weird to the wonderful. We’re not talking about funny bugs and Fear Factor stuff, but rather delightful morsels of delectability. Unfortunately the time and money factors mean that we generally stick to eating spaghetti bolognaise, bangers and mash, or the occasional steak and chips. But there are dishes out there that will make you happy to be alive and then immediately fill you with regret for eating something that you can’t consume every day. Of course this list could be endless, but we are bringing you our top eight.

A couple of years ago, you couldn’t move around the city without seeing a cupcake shop on every corner. Macarons are fast becoming the new cupcakes as patisseries the world over put these delicious bursts of colour on display. They are basically two chewy meringues cemented together with ganache or curd.

Tuck in to a bit of ‘roo

Aborigines have long appreciated the benefits of kangaroo meat, the tail specifically being somewhat of a delicacy. Of course many people feel uncomfortable eating these bouncing beings, but they are delicious and high in conjugated linoleic acid, meaning it has health benefits too.

Gold leaf is more about creating a feeling of opulence than taste, but you shouldn’t kick the bucket without being able to say that you ingested a bit of 24-carat gold. Decadent restaurants top their signature dessert dishes with gold leaf to make it just that much more extravagant.

Kobe beef is cuts of beef from the Tajima strain of wagyu cattle, so basically yummy Japanese cow. But like Champagne, it can only be called Kobe beef if it follows all the rules, which includes the bull being castrated to purify the beef and a marbling ratio of six or above.

There’s nothing quite like eating fresh food and within that category there is nothing better than fresh buffalo mozzarella and ripe tomatoes drizzled in extra virgin olive oil and balsamic vinegar. These simple flavours will please even the fussiest eaters, and it’s suitable for vegetarians too!

Peking duck is a dish that originates in Beijing, China and is so unbelievably tasty that you will keep going back for more way past the stage of loosening your belt buckle. The good news is that with China slowly taking over the world, Peking duck is available in most metropolises.

Truffles have a really subtle and nuanced flavour that can only really be appreciated by those with a refined palate. Because they are very difficult to find and can only be detected by pigs and trained dogs, they are very expensive and can only be eaten in small amounts. But a bottle of truffle oil should last a year.

World’s best: Gourmet Foodstore, which is worldwide because it’s online

Fugu is the Japanese word for pufferfish and the dish prepared from it. It is served as sashimi, considered a delicacy and is very expensive. Apparently the tastiest part of the fish is the liver, but it is poisonous and serving it in Japan was banned in 1984. The rest of it is fine though, if prepared by a professional.