Brotherly luck: The 7 factors that led to Olympic Gold

Home Brotherly luck: The 7 factors that led to Olympic Gold 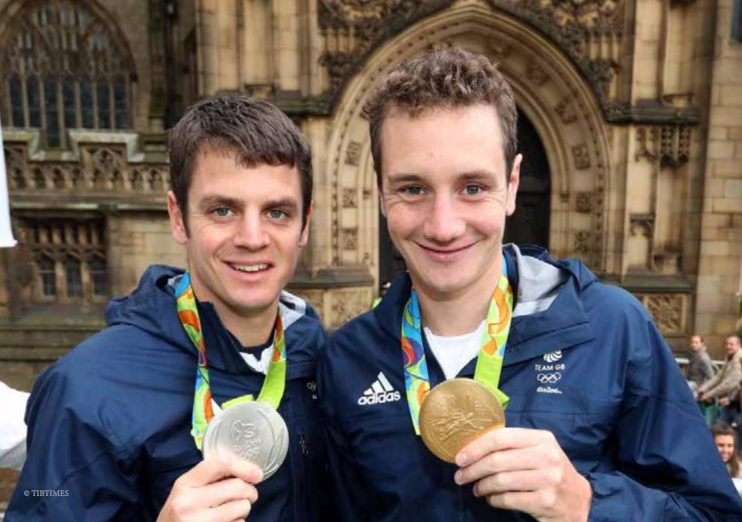 Alistair and Jonny Brownlee won two golds, a silver and bronze in two successive Olympics and are the acknowledged as the foremost athletes in the discipline. The Best You discovers how their childhood gave them the perfect ground in which to grow into world-leading triathletes

Sometimes when we’re trying to understand how Olympic Greats came to be, we forget about luck. For successful people, a combination of factors often creates the perfect soil for genius and excellence. It’s easy to hunt ‘secrets’ in successful lives and forget about fortune.

Olympic triathlete Alistair Brownlee tells how one event nearly changed the course of his life when his brother Jonny cut his finger and was taken to hospital by their dad. “An hour later, dad was being offered a job there,” Alistair says.

And if he’d taken it?

At the time, none of the Brownlee family could know what lay ahead. There was no ‘success plan’. But it is possible to look at success and learn what factors fed their particular genius. That doesn’t mean there’s a one-size-fits-all “success recipe”, but your success will be more likely if you study those who’ve already made it.

Here are 7 factors that led to the Brownlee brothers’ success:

1. Great Genes. Many Brownlee relatives claim they passed on great genes to their boys. Their mum swam competitively for Wales and their father’s side is said to include pole-vaulting champions. The boys’ dad was a keen cyclist, and they both loved physical exercise. Indeed, Alistair was so active, his mum says he needed to be outside at least two hours a day. Alistair says: “I’d have needed Ritalin if I hadn’t discovered swimming”.

2 Environment. Growing up in Horsforth, they had free run of the Yorkshire Dales. They could cycle and run whenever they liked. Jonny says: “We lived most days outdoors. Our grandparents owned a tiny cottage in Coverdale. There was no back garden, but there were miles of empty countryside and a big lake at Semerwater, where we could swim and sail. The cycling was fantastic, tiny roads snaking out from the hamlet into the fells and fields. The ridge from the cottage up to Tan Hill and the highest pub in England was a favourite for both of us.” Meanwhile, they cycled 10 miles to school every day which they described as “an ideal training session.”

3 Attitude. The two boys had very different attitudes. Alistair, was always highly energised and confident; Jonathan was more introspective. The combination meant Jonny was always encouraged to compete with his brother and others. The first time Alistair took part in a Cross Country Championship at the age of nine, he placed badly behind more experienced older boys. His reaction? “I think I’m a bit tubby for a runner. I think I’ll stop eating chips and puddings.”

The competitive streak applied to Jonny, too. “I was dragged into swimming by Alistair,” Jonathan says. He started swimming lessons at the same time his two-years-older brother. Though he hated it at first, he was forever needing to catch up. The perfect spur to attain more.

4 Fun. The Brownlee brothers seriously enjoy what they do. Their sense of fun was fostered by a local eccentric and true sportsman Dave Woodhead and his wife Eileen. They organised runs that were very different. “Everything has to be fun. Everything has to be hard,” Jonathan says of them. “Their attitude to endurance sport informed ours as kids and has stuck with us ever since.” Competitions included running while carrying an egg you mustn’t break – and prizes were huge amounts of chocolate. Fun became central to the Brownlees’ approach to sport.

5 Adventure and freedom. Their parents were keen the boys try everything, which led to some scrapes and adventures. Jonny recalls getting so sick of Alistair trying to capsize a boat they’d taken on to Semerwater that he just jumped in the water and swam ashore. When he was six, Jonny tried to stand on a windsurfing board when a gust of wind carried him a quarter of a mile on to the lake. “It made us appreciate that we were capable of far more than we thought,” he smiles.

6 Support. At Bradford Grammar school, the culture supported sport thanks to a teacher, Mr Kingham. The boys left the premises at lunchtime and disappeared for runs every day. “On Tuesday, we might to a time trial on Wednesday, we might do a long run. The teachers gave us complete freedom to do what we wanted,” Alistair remembers. “You could leave school, and that’s exciting when you’re eleven. From that point on I associated running with freedom.”

7 Belief. As a teenager Alistair knew he wanted to be an athlete. A careers teacher once asked what he wanted to be, and he said: “I want to be a professional athlete.” The teacher frowned. “Is that even possible, boy?” Alistair adds: “At no point did I ever think: I can’t do this. I shouldn’t be here. It all felt entirely natural.”

Belief wasn’t only about self-belief, however. To the boys’ surprise, others who saw them run spotted that they had Olympic potential and told their mother so. A sense of the possible surrounded them and spurred them on.

These are just seven of the positive factors that combined for their success. Is it possible to replicate those things? Perhaps not all of them – and of course there are others. But knowing this experience of the Brownlees gives you the opportunity to identify your needs, and start to fine-tune what you want in your life to make your success move that little bit closer.