Boxing Clever The Success of Amir Khan by The Best You 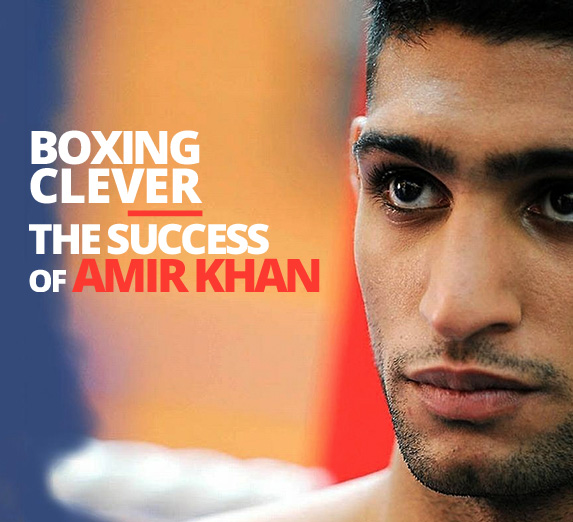 As Amir Khan takes to the ring in Vegas to meet Saul Alvarez, moving up two weight divisions, we look at the formative years of the young Asian boxer

There are countless routes to success, and Amir Khan‘s truly spectacular rise to fame and fortune shows how important the support and love of a family can be for someone to taste the fruits of hard work and raw talent.

Things could have been very different for the Khan family, when a few weeks after his birth in Bolton, Greater Manchester, he was readmitted to hospital with a severe chest infection. Perhaps this early scare made his family overly indulgent to him – they “felt a certain way towards me,” he remembers and gave him “everything I wanted, spoiling me, I suppose.” Whatever the reason, he went on to become “a handful as a kid”. He would fight with his cousins and got into trouble for the normal exuberant things kids do.

“I felt I could do whatever I wanted, when I wanted, that sort of attitude,” he recalls. Although he is absolutely clear that his family made sure he knew right from wrong, there were times when he didn’t want to recognise the rules, and he recalls that he had a fearless streak which could easily get him into trouble.

He remembers he was always playing outdoors. When he was five he ran out into the road and was run over by a car. He recovered after physio, and so the exuberant childhood continued which included getting into fights and standing up for himself against bullies. In fact, he began to get a “reputation”, as Khan puts it.

Khan’s dad owned a car repair garage and, later, a breaker’s yard, and it was his fateful decision to do something useful with his son’s energy. At the age of eight he took him to the Halliwell Boxing Club in Bolton.

“Everything changed when I started boxing. I channelled all my energies into that. I love everything about it, the training, the pads, the bags and best of all, the fighting.

Before that all my energies went into mischief. Eight years of mischief.” He adds: “I never threw another punch in the street. My tear away days were over.”

It’s a classic story. Khan could easily have gone on to be “the tough kid” at school whom trouble followed. But very often the thing that separates the disruptive troublemaker from the model member of society is just that they are given an interest into which they can direct their energy. This was exactly the case with Khan.

For him, boxing and the club became an all-abiding passion. He savours his first memories of the place: “It was in the basement of an old factory… It was dark and dusty, full of old leather bags tied up with chains… The ring was disgusting. The canvas had blood all over it!”

He goes on: “It stank. I learned to love that smell. You could take me blindfold anywhere in the world and I could pick out a boxing gym at 100 paces. Soon as I get the scent, I feel at home.”

At the time, Khan was not the lean boxing machine we know today. “I was chubby as a kid, short and fat. I used to sit there, thinking I would never get a six-pack… I was flat-footed, too”

His first coach, Tommy Battle, taught him the techniques he needed to start to fight, turning him from a “slugger” to someone who stayed on his toes and started to teach him the importance of footwork.

Lessons came thick and fast at Halliwell. He remembers the first time he drew blood in the ring, he was terrified, thinking that he would be in trouble. “The coach came up up, said ‘Well done’. I thought, ‘Great,  I can do it again!’”

For Khan, boxing became an abiding passion. He recalls that he went twice a week at first, but would gladly have gone every day. “I used to eat and sleep boxing. When I wasn’t at the gym I would train at home, watch videos. The Rumble in the Jungle was my favourite.”

After a year, the gym closed down and Tommy Battle trained at a different club. Unfortunately, the rules of the new club meant Khan was too young to box and for a year or so he did karate. But he knew he would be back, and he managed to get back into Tommy’s gym, even though he was only 10.

His first amateur fight was three days after his eleventh birthday. Up against a much bigger lad, Khan won on points. It was a story that would be repeated throughout his junior amateur career.

“Right from the start I had the support of my family,” he remembers. “My dad and uncles came to all the fights. We were a real team.”

In the following years he was often matched against people much older than himself and much bigger. Unsurprisingly, though he did well, he did sometimes lose. But in a fair, well-matched fight he was unstoppable, and he began to get a big following among his friends and family.

Khan went on to train under Mick Jelley, who taught him to think about his fighting and how to behave at the ringside. He always encouraged his boys to say, “Sir” to the officials. “If you do that and all the others ignore them, we would get the vote in a tight contest.”

His rise through amateur boxing eventually saw him set his sights on the 2008 Olympics at the extremely young age of 17. But while he was convinced he should go, he found that he continually had to prove himself to the Amateur Boxing Association, over and again.

His determination saw him do well in numerous internationals, including the Junior Olympics in 2003, in which he took gold.

The Americans were so impressed that they offered to have him on their adult Olympic team, with a green card. Khan went on to European Cadet Championships, and the European Schoolboys Championships. Still, the ABA would not consider Khan for the 2008 Olympics, until finally, he threatened to represent Pakistan. At last, the ABA relented, and it was to be the turning point in his life.

Khan took silver at the 2008 Beijing Olympics.  He was a 17-year-old fighting sensation. Soon after, he turned professional, and time will tell how his career goes.

Though it’s clear that there was the external factor of his father channelling him into boxing, alongside his natural, undisciplined energy, this is not only a picture of Khan succeeded because he has talent. Many others have talent, but don’t go on to win an Olympic medal.

Khan also has passion, a supportive family and natural sense of ambition.

“He is excited by fighting and the passion he feels makes him push himself to new pinnacles of fitness and technical excellence.

Khan is also straightforward in his psychological approach to things. As he says himself, he is fearless. This is a deeply empowering trait. He is also extremely determined, and his determination is aimed at getting him to the top. He was shown psychological techniques of visualising at the Olympics in coaching sessions, but those he found boring. He was already motivated and needed no more.

This does not mean that Khan isn’t a thinker. Many people mistakenly think that boxing is all brute force, but it takes far more than that. He dedicates himself to watching videos of upcoming opponents in fights so that he can analyse their strengths and weaknesses and be prepared to take on his opponent. And that’s not all. He also has the ability to respond under pressure to an opponent, to think and understand what they are doing, to work them out and to devise a strategy to beat them.

As a role model, he is a fascinating presence. He is a Muslim, and he is British. He acknowledges his Pakistani heritage, but he sees himself as British through and through. This makes him an important role model. Just a few days before his professional debut in July 2005, the 7/7 bombings occurred. At the fight, his friends turned up with a flag that was half-British and half-Pakistani, with the slogan ‘Knock Out Terrorism’ on it. He has a point to make – that there is another way for British Asians to take.

As such, he’s an important figure. He stands as a role model for Asian boys – he offers an alternative identity and the possibility of success – and not just for Asians. He is a genuine pan-national figure, who appeals to all. It is a role he relishes. Long may his success continue.