The boss behind ASOS

Home The boss behind ASOS 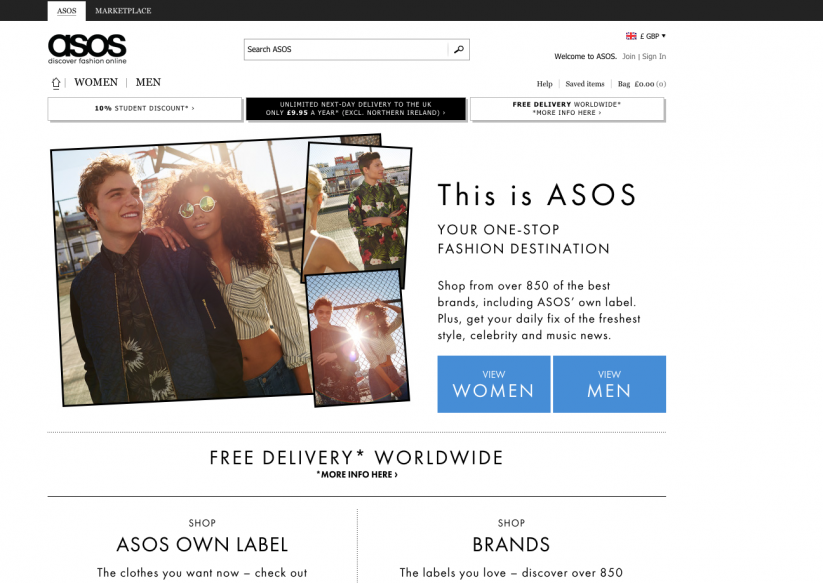 The face of shopping has certainly changed a lot since the internet has become commonplace in our homes. What used to be a mad dash to the high street on a Saturday morning can now be done from your couch at any time of the day. We look at one of the men behind the phenomenon of online shopping.

There’s something alluring about a successful entrepreneur who wasn’t always a hard worker. Perhaps it’s because it makes the lazier of us feel we might still hit the jackpot of success. Yes, it’s true that Mark Zuckerberg dropped out of Harvard, but it’s important to remember that he got into Harvard in the first place.

Nick Robertson, co-founder of ASOS.com, may not have dropped out of college, but he does describe his university experience as “diabolical” after getting very poor results at an elite educational institution. As the incomparable Austin Reed as Nick’s great grandfather, it may seem like all things sartorial run in Robertson’s blood, but it took him a while to fulfil his destiny in the world of fashion. After his performance at school left something to be desired, he spent some time on the slopes, skiing and not doing much else. Eventually, at the age of 20, he followed his father into the world of advertising, taking up a post at Young & Rubicam in 1987 as a media buyer, where he stayed for nearly four years. He left for a brief stint at Young & Rubicam’s main competition; Nick decided he was better off working for himself.

In 1996, Nick teamed up with Quentin Griffiths and formed Entertainment Marketing, an advertising agency that brought product placement to the forefront of sales tactics, placing well-known brands in TV shows. Pretty soon they were attracting big brands such as Carlsberg, Coca-Cola and Ford. Product placement is where the idea for ASOS was born, or as it was called then, As Seen On Screen.

“We read a stat back in 1999 that when the programme Friends aired,” says Nick. “NBC got 4,000 calls about some standard lamp in one of their apartments asking where it could be purchased. So that was the real idea behind the business. Anything that gets exposure in a film or TV programme creates desire among the public, so we based the shop around that.” Starting with products from the screen, it was only later that As Seen On Screen started in the world of fashion. The ASOS chapter in the book How 25 Good Ideas Became Spectacular Digital Businesses by Georgina Kate-Adams, published by Crimson Publishing, says it best:

Leaving Entertainment Marketing behind, Nick and Quentin launched As Seen On Screen online in June 2000, just after the dot-com bubble had burst. With the good fortune of having entrepreneurial families who were willing to back the venture, the pair raised a total of £2.4m in start-up capital and purchased a variety of celebrity-linked products to launch the business. Although the full extent of the comedown from the dot-com boom was yet to become apparent, launching an online business in the mid-2000s was still a risky business.

Yet the co-founders were undeterred. “It was always going to be an online business, because of the amount of products that came up after being on TV. It needed to serve that function,” Nick says, highlighting the wide reach and fast turnover of e-commerce. One of their first hires was buyer Lorri Penn, whom they scouted from Arcadia – Sir Philip Green’s umbrella retail group, which includes Topshop and Dorothy Perkins. She believed deeply in the potential of focusing the business on fashion (rather than furniture and other goods) – and they trusted her judgement. “It wasn’t until our first buyer came in, who was a fashion buyer, that we were pushed in that direction,” Nick says.

“Fashion is where we got the most returns for the business. Rather than saying ‘here’s a standard top’, we could say ‘here’s a top that Jennifer Aniston wore in Friends.” The founders acknowledged customer demand, and shifted As Seen On Screen from a website for odd celebrity-linked products to a focused haven of fast fashion. Targeted initially at 18 – 24-year-olds wishing to ‘steal’ an icon’s style, the company homed in on the popularity of starlets such as Kate Moss and Sienna Miller, selling replicas of their most-touted ensembles using smaller designers to supply the products. It was the right formula, and, with some strategic PR and affiliates, sales started to grow. In 2001, As Seen On Screen reached sales of £250,000. ASOS as we know it today was beginning to take shape.