Book Extract: Think And Grow Rich – The Power Of Dreams – By Napoleon Hill 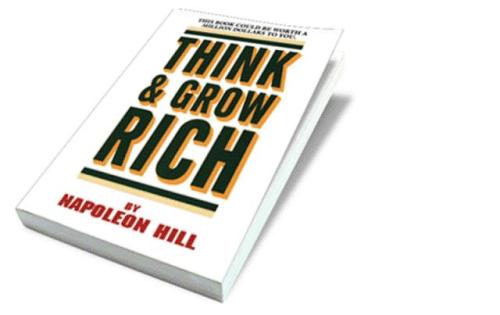 The Best You Can Be looks at one of the great works of Personal Development, Napoleon Hill’s Think and Grow Rich – and the secret of a dream that is realised.

Napoleon Hill’s Think And Grow Rich is an absolute classic of Personal Development.  Hill spent 25 years speaking with the most successful people of his generation, discovering what made them tick and how they organised their thoughts in order to make money and overcome difficulties.

In this extract from Think And Grow Rich from near the start of the book, Napoleon Hill encourages his readers to be inspired, to dream and to do.  Nearly 75 years on, many of the techniques and the mindset he identifies are what many Personal Development teachers still teach.

Enjoy this inspiration piece from a book filled with a multitude of riches!

The world is filled with an abundance of OPPORTUNITY which the dreamers of the past never knew.

A BURNING DESIRE TO BE, AND TO DO is the starting point from which the dreamer must take off. Dreams are not born of indifference, laziness, or lack of ambition.

The world no longer scoffs at the dreamer, nor calls him impractical. If you think it does, take a trip to Tennessee, and witness what a dreamer President has done in the way of harnessing, and using the great water power of America. A score of years ago, such a dream would have seemed like madness.

You have been disappointed, you have undergone defeat during the depression, you have felt the great heart within you crushed until it bled. Take courage, for these experiences have tempered the spiritual metal of which you are made–they are assets of incomparable value.

Remember, too, that all who succeed in life get off to a bad start, and pass through many heartbreaking struggles before they “arrive.” The turning point in the lives of those who succeed, usually comes at the moment of some crisis, through which they are introduced to their “other selves.”

John Bunyan wrote the Pilgrim’s Progress, which is among the finest of all English literature, after he had been confined in prison and sorely punished, because of his views on the subject of religion.

O. Henry discovered the genius which slept within his brain, after he had met with great misfortune, and was confined in a prison cell, in Columbus, Ohio. Being FORCED, through misfortune, to become acquainted with his “other self,” and to use his IMAGINATION, he discovered himself to be a great author instead of a miserable criminal and outcast. Strange and varied are the ways of life, and stranger still are the ways of Infinite Intelligence, through which men are sometimes forced to undergo all sorts of punishment before discovering their own brains, and their own capacity to create useful ideas through imagination.

Edison, the world’s greatest inventor and scientist, was a “tramp” telegraph operator, he failed innumerable times before he was driven, finally, to the discovery of the genius which slept within his brain.

Charles Dickens began by pasting labels on blacking pots. The tragedy of his first love penetrated the depths of his soul, and converted him into one of the world’s truly great authors. That tragedy produced, first, David Copperfield, then a succession of other works that made this a richer and better world for all who read his books. Disappointment over love affairs, generally has the effect of driving men to drink, and women to ruin; and this, because most people never learn the art of transmuting their strongest emotions into dreams of a constructive nature.

Helen Keller became deaf, dumb, and blind shortly after birth. Despite her greatest misfortune, she has written her name indelibly in the pages of the history of the great. Her entire life has served as evidence that no one ever is defeated until defeat has been accepted as a reality.

Robert Burns was an illiterate country lad, he was cursed by poverty, and grew up to be a drunkard in the bargain. The world was made better for his having lived, because he clothed beautiful thoughts in poetry, and thereby plucked a thorn and planted a rose in its place.

Booker T. Washington was born in slavery, handicapped by race and color. Because he was tolerant, had an open mind at all times, on all subjects, and was a DREAMER, he left his impress for good on an entire race.

Beethoven was deaf, Milton was blind, but their names will last as long as time endures, because they dreamed and translated their dreams into organized thought.

Before passing to the next chapter, kindle anew in your mind the fire of hope, faith, courage, and tolerance. If you have these states of mind, and a working knowledge of the principles described, all else that you need will come to you, when you are READY for it. Let Emerson state the thought in these words, “Every proverb, every book, every byword that belongs to thee for aid and comfort shall surely come home through open or winding passages. Every friend whom not thy fantastic will, but the great and tender soul in thee craveth, shall lock thee in his embrace.”