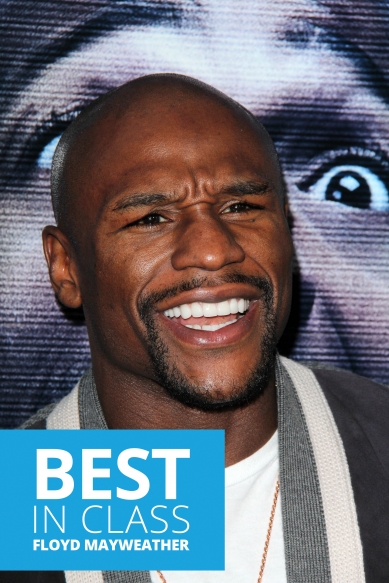 From an impoverished childhood to sporting and financial success, Floyd Mayweather determined a course to success, writes Dr Stephen Simpson

According to some experts, professional boxing is a sport in terminal decline. Others question whether it should even be called a sport. Possibly you have little interest in boxing. So why does this article appear in The Best You?

The answer is quite simple. It is because this article is about the richest athlete in history. His name is Floyd Joy Mayweather. It is no accident that he has achieved so much success. So what is his secret? More importantly, how can you use his secret to give yourself the best chance of being the best you? Mayweather’s story is superficially unremarkable. He was a kid from the ghetto with a dysfunctional family history, little money, little education, and no qualifications. However, what happened later is one of the most remarkable stories ever recorded.

Floyd Joy Mayweather is an American professional boxer. He has won ten world titles, and unusually these were at five different divisions, or weights. This fact, and his undefeated record, underlines his claim to be amongst the best fighters of all time, and perhaps even the best. What is not in doubt is that he is certainly the richest, and according to Forbes World’s 100 HighestPaid Athletes list he earned more during 2012, 2013, and 2014 than any other athlete.

Despite Mayweather’s background of severe social deprivation one lucky break was his family history which was rooted in boxing. This made his future career to escape the ghetto an obvious choice, and not a difficult one either. As a traditional German proverb states, ‘Whoever has choice has torment’. When the odds are so heavily stacked against success what just might be the secret that has brought Mayweather such material success? It is that he has consistently set himself powerful goals. They may not be perfect goals, but they do not need to be, and they have worked for him. ‘A goal properly set is halfway reached,’ said Abraham Lincoln. Mayweather’s goal from the age of nine was simple. It was to be the richest man in the world. It was a simple goal, and boxing was the only realistic way to achieve it. All of Mayweather’s subsequent successes are a result of this one overarching goal. Mayweather’s nickname is ‘Money’ and, as is so often the case with nicknames, it is uncannily perceptive. His boxing feats have stolen all the headlines, but it is as a businessman that he should be most respected, and even feared. Despite earning an estimated $105m in 2014, surprisingly Mayweather is the only athlete in Forbes’ list that does not earn any money from the endorsements that athletes from the more glamorous sports enjoy. His money comes only from fighting other boxers, and exceptionally in any sport, from promoting his own fights. He has tenaciously protected his rights, and so his earnings from TV, film and ticket sales are huge. Equally important in a sport where the more you get hit, the more long-term damage you may suffer, Mayweather does not expose himself to as many fights as many of his predecessors, nor does he need to. As he has pointed out on many occasions to his critics, the boxing world has changed. Its fans are prepared to embrace the exclusivity of their sport through the lucrative pay-per-view channels, and so there is much less pressure to stage numerous fights to generate earnings.

Mayweather has amassed a fortune, and arguably his biggest fights were outside the ring, protecting his rights from the armies of promoters, agents and managers. They are extremely intelligent men and women, and for Mayweather to take them on at their own game and win is not much short of a modern day miracle. So Mayweather has already achieved his childhood dream to be rich beyond measure. So what else drives him? Mayweather wants to be compared with giants such as Muhammad Ali and Sugar Ray Robinson, and even to be considered better than either of them. “I am the best,” is one of his favourite expressions, and as a powerful affirmation it works at many different levels of thought. It does wonders for his self-belief too.

To be the best is about as simple as a goal can be, and is more powerful as a result. It can drive every thought and provide motivation for yet another gruelling training session. Mayweather demonstrated this driving passion during a Reuter’s interview in 2010. “I don’t care what fighter you’re going to name, I’m the best,” he said. “Throw a name at me and I’ll break his stats down. Whatever they’ve done I’ve done it quicker, with no losses. The ultimate goal in boxing right now is to find a fighter that can beat Floyd Mayweather. And it’s not going to happen.” However, goals have to be skilfully selected. A goal that caused Mayweather much frustration and hence pressure, especially in his early years, was his quest for perfection. The pursuit of perfection has ruined many careers. Most successful people are perfectionist, and they move much easier to their flow state when they accept that they do not need to be perfect to win a fight or a boardroom tussle. All that is required is to trust their thousands of hours of practice, coaching, and their innate ability. Athletes often talk about the importance of letting go, or getting out of their own way. It is as if they have another side of their personality, or alter ego, that performs much better when empowered to do so.

Mayweather has mastered this flow state. It is his autopilot during a fight that reacts faster than conscious thought, and so its source can only be unconscious or reflex. The hallmark of a great boxer is not how hard he can hit his opponent, although this helps. More important is how hard it is for his opponent to hit him. Mayweather and Ali at their peak were like dancers, light on their feet, hands held low, swaying from side to side like a snake about to strike, hypnotising and mesmerising their opponent, daring them to unleash their punch, knowing that this might be the last thing that they remember as they go down and their head hits the canvas. Another benefit of locking into your autopilot is that it does not have emotions. Emotions are great for sharing with friends, but have no place in the ring. Mayweather is a superb controller of his emotions, and demolishes his unwary opponents with the clinical precision of a surgeon. So Mayweather is a genius, as his achievements both inside and outside the boxing ring have proven. The elegance of Mayweather’s goals is that they are not only goals, they are also powerful affirmations. If you tell yourself the same thing enough times you will start to believe it, and then you are more likely to achieve it. Mayweather’s goals are simple. With his lack of options they had to be. They were to be the best, and to be rich,  seriously rich. He has achieved both, and so is a worthy champion. Boxing fans always want more from their idols. So they still have one burning question left for Mayweather. When will he fight Manny Pacquiao? They may not have long to wait. The latest rumour is May 2015. Watch this space.

Dr Stephen Simpson is a Fellow of the Royal Society of Medicine, an elite performance and confidence expert. A best-selling author and presenter, find out more at drstephensimpson.com MORE ICON: Download The Best You app at thebestyou.co to read more about Floyd Mayweather’s life story.