8 Best Festivals You Should Not Miss by The Best You 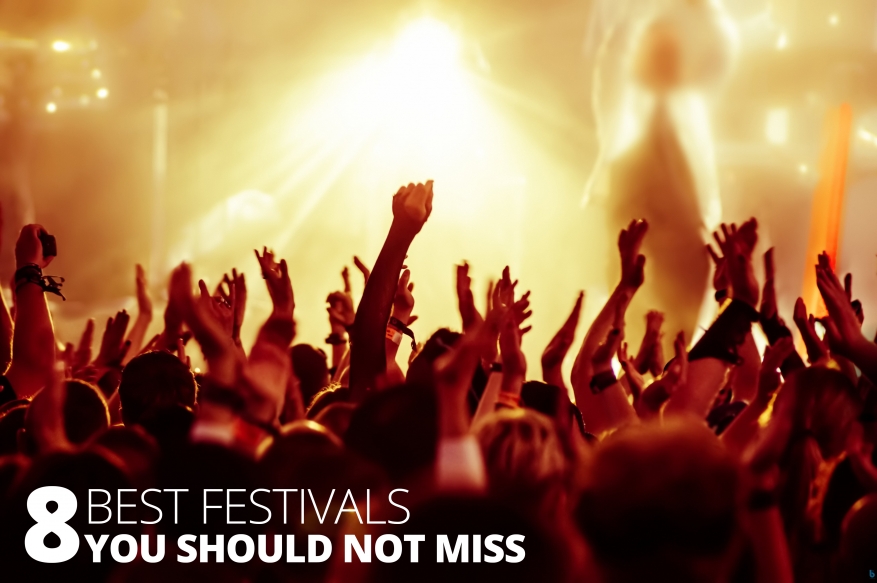 There are a lot of perks to the summer months. There’s the warmer weather, of course, the great markets, the street performers, and then there are the music festivals. Music festivals have been around since the flower power era, but they have come a long way since then. From informal gatherings in fields, a la Woodstock, they have morphed into well-oiled machines with decent toilets (sometimes) and cash machines. Most countries offer an array of festivals over the summer, but these are the ones that are really worth the trek.

Glastonbury, or Glasto to the well-seasoned festivalgoers, is a five-day music festival that takes place in Somerset, England. In addition to contemporary music, the festival hosts dance, comedy, theatre, circus, cabaret, and other arts. It is organised by Michael Eavis on his own land, Worthy Farm in Pilton. Most of the festival staff are volunteers, helping the festival to raise millions of pounds for good causes.

The Edinburgh Festival is a collective term for many arts and cultural festivals that take place in Edinburgh, Scotland each summer. Though technically not a music festival, the Edinburgh Festival will definitely have sufficient entertainment for music fans, as well as theatre, comedy, dance, fine art, and so much more. And for those who like to live on the edge, there is the Fringe.

3. LOLLAPALOOZA
Lollapalooza is an annual music festival featuring popular alternative rock and hip-hop bands, dance and comedy performances, and craft booths. It has also provided a platform for non-profit and political groups. Conceived and created in 1991 by Perry Farrell, Lollapalooza ran annually until 1997 and was revived in 2003.

4. South By Southwest
South by Southwest, which is shortened to SXSW by the cool kids, is a set of film, interactive, and music festivals and a series of conferences that take place every year in Austin, Texas. Launched in 1987, it has continued to grow every year, and is the largest music festival of its kind in the world.

Coachella is a music and arts festival, founded by Paul Tollett, organised by Goldenvoice, and held at the Empire Polo Club in Indio, California. It features many music genres, including rock, hip-hop, and electronic music. The festival takes place over two three-day weekends. The 2014 lineup was announced in January, and tickets sold out in less hours.

Duration: 2015 dates to be announced.

Sónar is a three-day electronic music festival founded in Barcelona in 1994 by Ricard Robles, Enric Palau and Sergi Caballero. Last year, four festivals took place, each in different cities: Barcelona, Tokyo, Osaka, and Reykjavik. The festival has been divided into two parts since its inception. Sónar by Day and Sónar by Night.

Described as an experiment in community, art, radical self-expression, and self-reliance, Burning Man is an annual, week-long event held in in Nevada. It begins on the last Monday in August and ends on the first Monday in September. Its name comes from the ritual burning of a large wooden effigy, which is set alight on Saturday evening.

8. Splendour In The Grass

An annual Australian music festival held near Byron Bay, New South Wales. Jointly created and promoted by the Village Sounds and Secret Service music companies, it began in 2001 as a one-day gathering to cater to Australia’s winter season. In 2002, it expanded into a two-day event. Currently, the festival hosts 30,000 revellers over a three-day timespan.