Apple vs. Android by Matt Wingett 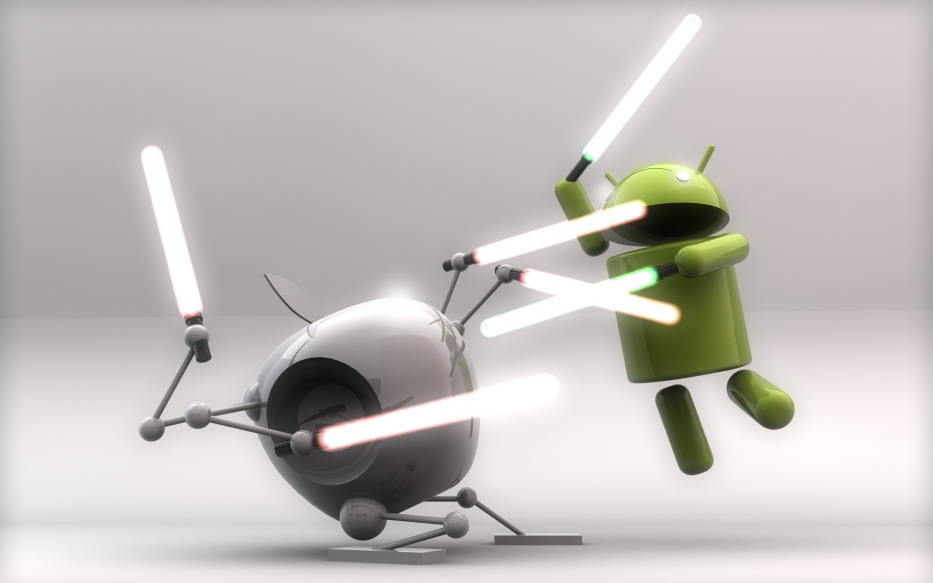 There’s no doubt about it, Apple is going to be around for a long time. With its dedicated band of followers and its reputation for great design, it is the product of choice for hundreds of millions of people around the world. But, asks Matt Wingett, will its massive profitability continue unabated, or are the cracks already starting to appear thanks to that cheeky young upstart, Android?

Let’s be clear about this. People who sing the demise of Apple are either seriously deluded or have a hidden agenda.

But that doesn’t mean that Apple’s position in the market is always going to be as powerful as it is today.

After all, while there are plenty of tech commentators telling us that the latest fruity iOS with its cleverly named iMac, iPad, iPhone and iWhatever-Else-Apple-Can-Think-Of as hardware have “dominance” over this market or that, there are plenty of others warning that Android is stealing a march on the old venerable Apple.

Actually, it’s difficult to get a real, detached view on the matter, partially because Apple users appear to have subscribed as much to a cult as to a technical gadget. That probably stems from the legendary start of the Apple project. After, all, how can you not feel a sense of frisson when thinking about the LSD-taking University drop-out who ran a computer factory from his garage while talking Zen Buddhism and incorporating its ethos into his design?

There’s a legacy of the counter-culture – a kind of feeling that something is not only superbly designed, but somehow cocks a snook at the establishment.

For those who suffer this Jobsian nostalgia, it must come as a shock to read about Apple’s aggressive corporate stance in trying to stamp out rivals throughout the world. For a company that once had its adherents describing Microsoft as “The Evil Empire”, that is quite a journey to have come.

But of course, we’ve moved on a long way from those Jobsian days. Apple nowadays has a reputation for solidity, reliability and extremely highly tested apps and hardware. As a friend said to me recently, “the reason I buy Apple is that it does what other Smartphone, computers and tablets do, it just does it better. It’s the Rolls Royce of the tech world.”

And that’s where Android comes in. Comparisons between the two systems are fascinating in that they reveal both a similarity of roots and a vast divergence of attitude.

Apple, after all, is nothing if not clever about its image. The forbidden fruit that gives you knowledge, is good for you, is simple and wholesome and has all that childhood positivity attached to it (an apple a day keeps the doctor away, an apple for the teacher, the apple of my eye, the Big Apple) is a fantastic brand.

Android, on the other hand, appears deliberately to have gone down the opposite route. Its OS releases are called “cupcake” and “jellybean”, and are all about something sweet that you just can’t resist. It may not be as wholesome as an Apple, but you’ll get a rush from it and probably won’t go to bed for a week on the high from all those food additives.

There is something quite “upstart” about this OS. After all, it is based on the Open Source software known as Linux, meaning that it is immediately changeable by any programmer who wants to get in there and fiddle around. You want to change the software, you can do it – unlike the locked Apple OS. Sure, that’s democratic and it’s collegiate. It also means that you don’t get the rigorous checks on the system that you do on Apple software, meaning there is danger of malicious code creeping on to your phone. But, it also means it has that strange cachet of being more democratic – of not telling you how you should organise your software, and for some that is a great positive.

Sure, it’s got Google behind it, but in its early days when Andy Rubin, one of its founders, was down to his last few bucks, a friend bailed him out with an envelope of cash, no strings attached. This is the stuff of legend that tells a story that is very different from that of the most profitable corporation in the world, Apple.

Why do I look at the semantics and the myth behind these two systems? Because I believe myth shapes the way people think, and eventually the way they buy. Apple is a Rolls Royce system. It makes massive profits on each unit it sells. It offers high quality, highly tested apps from its store and takes a long time ensuring that its products are safe. For many, they wouldn’t sully themselves with anything less. That is brand loyalty at its best.

By the same token, it slows and stifles innovation, and for many is simply unaffordable.

That’s where Android has started to win. Used in numerous different makes of phone, it can be bought cheaply or expensively. You can have your Rolls Royce experience or your Ford Fiesta spin about town. You can get hold of one that does what you want, and when you want to replace it or drop it down the toilet, you aren’t looking at the back end of hundreds of dollars or pounds when you do.

To me, the current state of things reminds me of something from way, way back when these two systems weren’t even a twinkle in their creators’ eyes. Betamax Video recorders were no doubt the superior system. But in the end, it was VHS that won through with aggressive pricing. I don’t believe the Apple will ever disappear like Betamax did. But it wouldn’t surprise me if it became the preserve of the rich man, the stylist… and dare I say it… the nerd?