Angelina Jolie: an angel in disguise 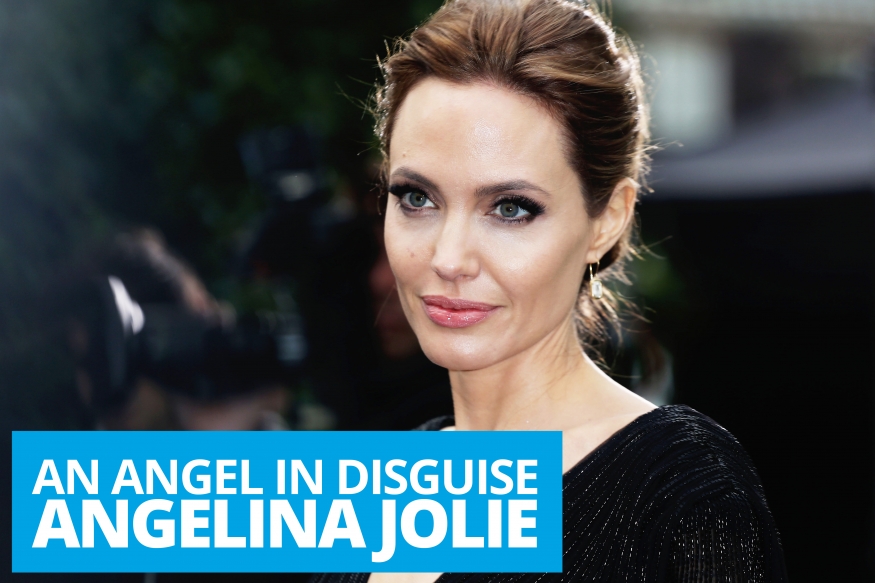 Beautiful, talented, with a father nominated for Oscars and an actress mother, it’s tempting to think that Angelina Jolie had it all handed to her on a plate. But that only tells half the story. The Best You reveals all.

Despite the apparent good fortune of being born into Hollywood glamour, Angelina Jolie grew up in a turbulent Hollywood household in which her mother hardly saw her for the first year of her life. It’s said that for that year she rarely saw the same person two days in a row and was left by a string of babysitters to stare at the sky in an empty apartment above her mother’s home. It was a place so lonely her babysitters nicknamed it the Ivory Tower.

In 1971, her mother, Marcia Lynne Bertrand, later Marcheline Voight, had married the young and handsome film star Jon Voight, famous for his role in 1969 film Midnight Cowboy. She was a model and actress.

Ostensibly a devout family man, the 37-year-old Jon Voight strayed from Marcheline just as Angelina was born in 1975, falling in with the younger theatrical student Stacey Pickren. Devastated, Angelina’s mother told friends she could not bear to look at her new daughter because she reminded her of her unfaithful husband. So, as Marcheline struggled with shock and depression, Angelina’s year-long sojourn in the Ivory Tower began.

The years that followed were filled with strife. Jon Voight tried to be a good father to Angelina, but at the same time was haunted by his relationship with Pickren, who, as a member of the infamous sex-based cult The Children of God had opted for an open relationship. The situation took its toll. As Voight put it, “Nobody tells you the cost of free love.”

Angelina made her first foray into film in the movie “Lookin’ To Get Out” in 1982. Starring Jon Voight with Marcheline as his wife and Sandra Pickren as a prostitute, Angelina played the daughter. She was seven years old.

With strong tensions at home, by the time she was 13 years old, Angelina was starting to go off the rails. Her mother, always more interested in being her friend than a disciplining influence, let her run wild and take drugs.

When Angelina was 14, Marcheline invited Angelina’s boyfriend to stay at the house many nights a week, giving up the master bedroom to the two children. Her reasoning was that Angelina was going to have sex anyway, and she felt that it would be safer for her to do so at home rather than in the back seat of a car. Her lax attitude toward her daughter’s development meant Angelina had plenty of time to go to clubs and take drugs, despite her mother’s avowed intention of “containing” her at home.

As a teenage, Jolie developed anorexia and started cutting herself, often on her inner thighs. An argument with her boyfriend at this time saw them both hospitalised after stabbing each other.

It is fair to say that Angelina was lost and confused. After leaving school, she declared she had no interest in acting, and subsequently went into modelling. By the age of 17, this striking young woman was chosen to replace Cindy Crawford as the poster girl for a swimwear brand. Unexpectedly, Jolie turned the job down, deciding instead to go into acting. She refused to use her father’s surname, opting to use her middle name to become Angelina Jolie.

Impulsive, wild and sexually predatory, Jolie’s life was a series of extremes. She took numerous lovers of either sex, indulged in drugs.

Those extremes had other, even darker manifestations. At the end of filming for one movie, Jolie fell into a post-filming low and hired a hitman to kill her. She arranged for small amounts of money to leave her account, thus not making him a suspect in her suicide. At their meeting, the hitman advised that she should call him back in a month and if she still felt the same, he would fulfil the contract. She never made the call.

In typical impulsive form, Jolie fell in love with English actor Johnny Lee Miller immediately after she met him. They were married within six weeks, just as he was finishing filming the classic Irvine Welsh movie, Trainspotting. Within four weeks, she had been unfaithful to him, and within 18 months the marriage was dead.

So her life went on through her twenties, swinging between extremes of relationships, heroin addiction and film-making. At the same time, the extremes of her life fed into her acting accomplishments. Jolie won a string of nominations and awards for her screen work, including an Academy Award for best supporting actress in the movie Girl, Interrupted.

Jolie tried to find some balance by marrying US actor and musician Billy Bob Thornton in 2000.

It was during her marriage to Thornton that she started to turn things around. Her heroin addiction was taking a toll on her looks, and she vowed to stop. She had landed the lead role in the film Lara Croft: Tomb Raider, which required her to be fit, focussed and upbeat. Drawing on the poised, controlled character of Croft as an inspiration, and confined by an 11:00pm curfew by the director, she kicked the heroin habit and started to take charge of her life.

Then, during filming on location in Cambodia, Jolie’s insular filmstar lifestyle came into direct contact with genuine poverty. As Thornton later observed, seeing three people walking down the road, two blind and one without arms, carrying piles of wood back to their village put annoyance at the worn leather on the seat of your sports car into perspective.

Jolie, surrounded by the mysterious buildings of Angkor Wat, the chanting of Buddhist monks and the sight of real poverty and suffering began to rethink her life.

Returning to the US, she was due to play a wealthy socialite who becomes involved in an African refugee crisis in Beyond Borders. The role spoke to her, and when the film was shelved she decided to approach the UN and find out more about humanitarian crises unfolding around the world.

2001 was an intense period of learning for Jolie. She threw herself into her research, insisting on paying her own way, and being sure to live in the same conditions as the UNHCR workers she travelled with. Some of her research was genuinely dangerous, and her father even tried to prevent her going on one of her fact-finding missions, so concerned was he for her safety.

Never one to be put off, Jolie continued to work with the UNHCR, donating large amounts of money and discovering more about those suffering throughout the world.

After leaving a mission to the Pakistan-Iraq border where there was a refugee crisis due to the US war in Afghanistan, she donated $1million – the largest single donation from a private individual in the UNHCR’s history.

As she said: “We cannot close ourselves off to information and ignore the fact that millions of people are out there suffering. I honestly want to help. I don’t believe I feel differently from other people. I think we all want justice and equality, a chance for a life with meaning.”

It was not long before the UNHCR took her on as a goodwill ambassador in 2001.

At around this time, Jolie also decided to adopt a child from Cambodia, wishing to give a child the opportunity to grow up with all the advantages in the West.

She and her husband Billy Bob Thornton searched the orphanages of Camobodia. This first adoption was fraught with difficulties, with questions being raised in the Press about the ethics of adopting from overseas. Nevetheless, Jolie and Thornton finally adopted Maddox in 2002, from an orphanage in Phnom Penh.

Life wasn’t going to be a simple curve for Jolie, and her one-time obsessive relationship with Billy Bob Thornton abruptly foundered in 2002. A new Jolie, was emerging. From here on, her career and her passion for good causes went hand in hand. Jolie became the most highly paid actress in Hollywood, at the same time as becoming a vocal advocate for the work done by the UNHCR.

Working on the film Mr and Mrs Smith in 2005, Jolie was next to meet Brad Pitt. Finding that they had so many things in common, Jolie and Pitt got together and by 2006 she was pregnant with his child.

It appears that the ever-restless Jolie made the right choice as to her partner. Brad Pitt has supported his wife’s working endeavours as well as her charitable ones assiduously ever since.

What is extraordinary about Jolie is that she brings the same single-minded obsessiveness to everything she does. In her early years this focus caused destructive relationships, debauchery and self-harm. In later life that same single-mindedness has been thrown in to something genuinely positive.

Alongside her extraordinary acting awards, Jolie has amassed numerous awards for her humanitarian work. From numerous humanitarian awards, a “Citizen of the World” award and an award from the International Rescue Committee in 2007, the list of recognition goes on and on. From the King of Cambodia she received Cambodian citizenship for her work in setting up a nature reserve and funding a Millennium Village in accordance with UN development goals. In Addis Ababa, Ethiopia, she funds the Zahara Children’s Centre, which treats children suffering from HIV/Aids or TB, and she has built at least 10 schools in Cambodia and numerous other schools throughout the world.

Her ceaseless and untiring work has undoubtedly saved lives and improved the lots of many others. It appears that Jolie has connected with something bigger than herself. Her impulsive nature that led her into heroin addiction when younger still continues to shape her actions in many ways – but she has learned to be addicted to things that are good for her – and for others.

With three of her own children fathered by Brad Pitt, and three adopted children from around the world, Brad Pitt’s joke that they are intending to have a “football team” looks like it might actually be true. Her restless energy is poured into the family and the charitable work she does gaining her accolades from around the world. She is co-chair of the Clinton Global Initiative’s Education Partnership for Children of Conflict, which funds education for children affected by disaster, and she also co-chairs Kids In Need of Defense (KIND), providing free legal aid to unaccompanied minors in immigration proceedings across the US.

Never long out of the headlines, this year a more personal story surfaced. In a surprise move in response to the death of her mother and other female relatives from cancer, Jolie announced she would have a double mastectomy. Once again her strong-mindedness and her strength of mind fed into that decision.

Her life has been extraordinary tale, perhaps worthy of one of the films she has starred in. From someone who was so very lost in her early years, she has become a positive force for good throughout the world. Long may her work continue.