Against all odds – Robert Downey Jr 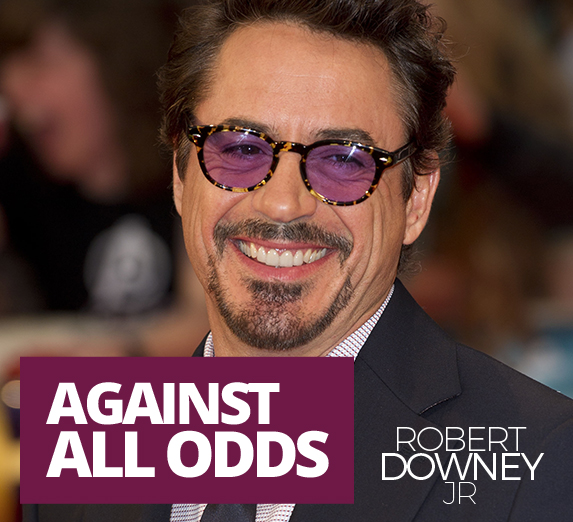 Robert Downey Jr is a man who has succeeded as an actor, despite being blessed with talent, parents in the business, natural charm and a photographic memory. It sounds like a paradox, but The Best You explains why, in his case, it is not

Chaos is probably the best word to describe the early years of Robert Downey Jr. The son of an underground film director and an actress, Robert grew up in an a deeply unconventional environment that was edgy, exciting, highly creative and devoid of boundaries.

It was into this creative milieu that the Downeys brought two kids, first Allyson, and then Robert, in 1965.

Surrounded by artists and poets who were only interested in following their dreams, young Robert grew up with a wayward streak that came very close to being his downfall in the years that were to follow. Central to the problems he encountered later, would be one event that strongly shaped his life.

When he was just eight years old, he challenged his dad why it was okay for him and his friends to smoke marijuana, yet tell his son he could not. Downey Senior, perhaps feeling a hypocrite, relented and gave him his first joint. Though marijuana is not addictive in the way heroin is, it gave young Robert a taste for drugs, and the experience of a lifestyle that would eventually nearly destroy him.

From early on, young Robert appeared in his dad’s films. His first appearance was playing a dog in a movie called Pound in which the five-year-old Downey asks a bald man if he has,

“Any hair on your balls?” Early on, Downey began to show character traits that would mark his later work – the desire to be spontaneous and an extremely low boredom threshold.

In one film, he refused to reshoot a scene – informing his dad that he’d done it right the first time. His dad gave him a talking to and a slap; Downey acquiesced and did the take again.

At home, the camera was continually rolling while he and his sister played together. His schooling was often interrupted by his dad’s trips all over the world to go on film shoots.

He even spent several months in London, England, where he was placed in a school that he hated. The constant interruption to education would leave him feeling inadequate in later life.

He and Allyson later attended Stagedoor Manor – an upstate New York acting school, where they were considered cooler and more mature than the other kids around them.

His attitude to schooling was lax. After his parents split in 1978 – partially due to Downey Senior’s drug’s problems – young Robert lived with his mother in a cramped apartment in Manhattan, where she fell into depression.

He lived between his mother’s and father’s homes in New York and LA, and continued his own slide into increasing drug use. Experiencing a growing desire to be in the movies, he eventually enrolled in an LA High School, often climbing the 20-foot high fence around the school and bunking off to the local park to drink beer and smoke drugs, returning in the evening for music or drama classes.

In his drama classes, he began to show real skill.

“There was something about his performance that was spontaneous, wild and brilliant, with an unbeatable ability to improvise a character and make people laugh uproariously.”

His spontaneity showed in other ways. One girlfriend remembers him as a teenager, unexpectedly walking through a fountain at a shopping mall on their first date. This was Downey all over – goofing around and being both charming, funny and at times deeply annoying in his unpredictability.

Another time, he stole a friend’s car and drove it two blocks. The car was undamaged, but that crazy side in him was looking for kicks and excitement from early on.

His boredom, his desire to experience the world intensely led him to quit school in 1982, before graduation. He returned to New York at 17 and began appearing in plays off Broadway, including a short-lived musical.

In 1985 he was cast in that year’s season of Saturday Night Live, in which he bombed, but went onto appear in his first film role, Tuff Turf and next, Weird Science.

By now, Downey had started a relationship with Sarah Jessica Parker. All the while, Downey continued to be a hell-raiser away from the film set. Parker, coming from an organised background, dedicated to work, was often the reason he managed to hide his drug-taking from the rest of the world, and crucially, film directors.

She would clean him up and get him into film sets after a night of drunken carousing. One account talks of him sleeping in make-up in the back of a car, being asked by the director to come on set. He woke up, delivered his lines perfectly, then collapsed back into the car to sleep.

Other accounts reveal that he has a photographic memory, and is able to deliver his lines after just one brief look at a script.

He appeared in a series of roles in various films – some of them looking like he was taking the next step towards fame and fortune, others instantly forgettable. But even in the more mundane films there was something about Downey that made reviewers sit up and notice.

His really big break came in 1992 when he appeared in the David Attenborough biopic, Chaplin. It was a role Downey viscerally wanted, and after the audition he went on to give a brilliant short physical comedy routine with a ladder. Attenborough was deeply impressed, and he won the role.

His extraordinary precision in playing Chaplin was legendary. The real Charles Chaplin‘s daughter, Geraldine, also appeared in the movie, playing her own grandmother, Hannah. After studying footage of Downey as Chaplin, she commented: “That young man was Daddy!”

For the extraordinary job he did in bringing Chaplin back to the silver screen he received an Academy Award nomination for Best Leading Actor, as well as a BAFTA.

For many actors, this would have been the start of a fabulous career. But for Downey, great fame and great money were his enablers to follow a debauched and drug-filled life. His early introduction to drugs would soon catch up with him.

A certain level of drug-taking is tolerated in Tinseltown – but when it becomes public knowledge, then it is a liability for the studios. By the mid 1990s, Downey was a heroin addict, on top of his drinking, cocaine, valium, mushroom, speed and cannabis use.

Jessica Parker quit him, begging him to get help for his growing addiction. Later, Downey met and married fashion model Deborah Falconer after knowing her for just 42 days. She also was a drug user, and though they started off with the intention of helping each other to go straight, it was not long before they were both living the, literally, ‘high’ life.

He was arrested after being found by shocked house-owners, asleep in their son’s bed. In fear, the house-owner called the police. A taxi had dropped him off at the wrong part of his street, and, completely high, he hadn’t realised he was in the wrong house.

The following decade amounts to a long story of drug abuse, arrest, prison, rehab, escape from rehab, brilliant film performances, announcements that he had finally gone clean, promises to judges that he would never touch drugs again – followed by relapses, further prison or rehab, more film performances and prison again. During that battling time, Downey was beaten by fellow prison inmates, attacked and held in solitary confinement where he was forced to hang his food up in his cell to stop rats getting to it.

“Sometimes, he looked like he had gone clean – sometimes, an increasingly exasperated judge looked helpless to bring about change.”

It finally happened for him in 2003, when he met Susan Levin. With addiction, sometimes it isn’t only reaching rock bottom, it’s also having the support to go on.

With Levin behind him, Downey found a combination of meditation, 12-step programme, exercise and kung fu, which has freed him from his addiction. Since then, he has gone on to become one of the most famous actors of his generation, famously playing Sherlock Holmes and Iron Man in blockbuster movies.