Adele: The Real Deal by The Best You

Home Adele: The Real Deal by The Best You 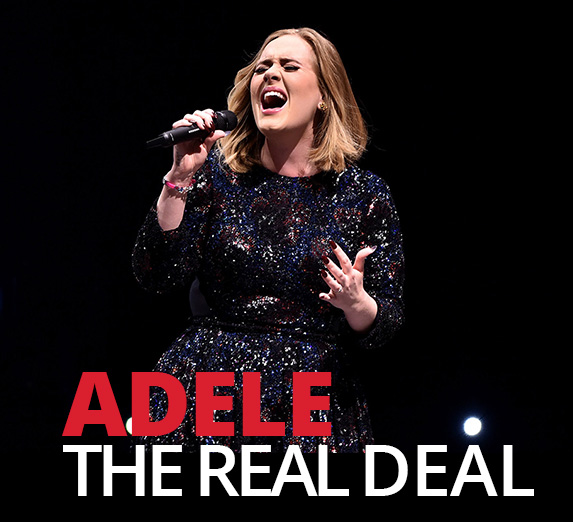 Mid-tour and confirmed as the headline act for this summer’s Glastonbury, Adele’s comeback after a self-determined leave of absence from the stage, has been as electrifying as her singing. The Best You looks at the singer who set out to write other people’s songs, but wound up centre stage, and who talks openly about her lack of desire for the fame that found her

Authenticity is a word you often hear bandied around in the personal development world as a key to success. Some self-help trainers imply that with that one trait alone, you can conquer the world. The truth is more complicated. Some stars minutely control their media appearances and keep quiet about their private lives; others do the opposite, detailing publicly every aspect of theirs to a world equally fascinated and appalled.

Nevertheless, in a social media world, for a certain type of star, authenticity can draw your audience close. For singing sensation Adele, her unpretentious down-to-earthness is undoubtedly an ingredient in her success.

Born in Tottenham in 1988, Adele grew up in North London. Her mother, Penny, was an art student when she met Adele’s father, Mark Evans. Her parents split when she was three, and she didn’t see much of Evans, who returned to his native Wales while she stayed with her mum in London. In the early years before the split, he claims to have influenced her singing, enjoying his chosen tunes.

Adele had a natural love of music from early on. Her father recalls when she was four that she had arrived to visit with a guitar from a charity shop, and told him she was learning to play it by listening to music on his record player and trying to make the same noise. “Within a couple of years, she’d started singing along and I remember thinking, when she was seven, ‘My God, Adele’s really got it.’”

At home, her mother also noticed her talent, and would get her to entertain friends who had come round to dinner, even arranging the lights in the room to mimic a spotlight.

However, being a music star was far from her mind. She had moved with her mum for a brief stint to Brighton and then to South London. Her new school, Chestnut Grove School in Balham, was not the right environment to support her musical talent, and she was already well aware of the direction her own skills lay.

“They gave me a really hard time, trying to bribe me, saying that if I wanted to sing I had to play clarinet to be in the choir. So I left.”

When she was 14, she held a microphone in her hand for the first time and heard her recorded voice. One of Adele’s traits is her lack of self-consciousness, and it has been true of her from the beginning. “Most people don’t like the way their voice sounds when it’s recorded. I was just so excited by the whole thing that I wasn’t bothered what it sounded like.”

Her musical life reached a new level when she was accepted at the famous BRIT School in Croydon – a government-funded establishment designed to nurture musical and performing talent.

Here, she found the natural outlet for her voice; it reminded her of the legendary Fame Academy from the movie set in New York.

“It was a bit like Fame sometimes – you get people doing their ballet stretches and singers having sing-offs… I’d rather that than someone pulling a knife!”

For her, it was exactly what she needed: “I hate to think where I’d have ended up if I hadn’t gone. It’s quite inspiring to be around 700 kids who want to be something – rather than 700 kids who just wanna get pregnant so they can get their own flat.”

Real talent was all around her. Amy Winehouse had attended the school and gone on to great things, though Winehouse never spoke positively of her experience there. Leona Lewis was Adele’s contemporary. Adele found the excitement, the freedom to experiment and the many different musical tastes around her to be an extraordinary education.

One thing that the school didn’t teach her was how to get over her nerves in a recording studio. Famously, she still gets deeply nervous, to the point of vomiting before gigs. At the same time, she won’t be drawn into analysing her singing. She claims to have had only one singing lesson, which made her self-conscious for a while. Instead, she learns by listening and copying and experimentation.

When she was 16, in 2004, she wrote and recorded some songs at the BRIT school for a project.

She had two songs featured in a small online publication, Platforms magazine, and others were uploaded to a MySpace account by a friend.

The power of the web in music was just beginning to be realised at this point, and Adele was on the receiving end of this new, intimate innovation. Soon her friend was receiving emails from record companies, but Adele was very cautious and didn’t really believe that she was creating such interest.

Eventually, however, she did follow up one request, and went to XL Records, and by 2006 she was signed up for her first record deal.

From this point onwards, her rise to fame has been, to use a cliché, genuinely meteoric.

She went on to fame in the UK, and then to success in the US – and the rise has gone on from there. Her audiences are genuinely warm to her and she has a massive, devoted following.

So, what is her appeal? She certainly has an idea about the direction she wants to take, and follows her instinct. Her manager, Jonathan Dickins, commented of her in her very early years:

“For a girl who’s just turned 20 years old, it’s unbelievable how focused she is in terms of what she thinks is right for her career.”

She is also not a standard mass-produced, skinny, blonde pop starlet. Her build generates comments about her weight, which she bats off without missing a step, one time telling The Daily Telegraph:

There is no doubt that she is a deeply skilled songwriter and a powerful singer. Her voice has an irresistible force of nature that sweeps you along.

Much in that delivery is about power. But there is also nuance. In her live performances she is artlessly friendly and warm with the audience.

For example, at her famous Royal Albert Hall concert which can be viewed online, she is self-deprecating and likeable. When she is asked to do an encore, she mocks herself and the convention that rock stars should leave the stage only to be clapped back on.

“I don’t like encores. I think unless you’re Dylan, or Paul Simon, or Madonna, or someone like that, you should stay on the fucking stage.

I don’t have a catalogue of music, yeah? When I do, I will keep you waiting, for sure.”

And what of her authenticity? Later, in that same introduction to her song, Someone Like You, which featured on her second album, 21, she says of the album:

“I didn’t have that one song that I believed myself on, that one song that moved me, and it’s important that I do feel like that about at least one of my songs so that I have the confidence to let people that I don’t know listen to my music, because it’s so personal.”

She adds that she “wouldn’t have had much conviction when talking about the album” if she hadn’t had that song. What’s more, she is surprised that the song resonated with people and she, “didn’t know that it would go on to affect so many lives.”

It’s this genuineness that wins so many people over. Sometimes her authenticity backfires, like the time she announced, on receiving her first Grammy Award that she hadn’t even heard of the Grammys until recently (which was seen as rude, rather than a statement of her own ignorance); or complaining about the amount of tax she pays, in order to fund “shit schools” and trains that are late.

But these missteps are rare with her. She is instinctively, unselfconsciously herself. Hilarious, unscripted moments occur, like the time she received an Oscar*  and announced she had “got a bit of snot” from getting so emotional receiving the award, or joking about male fans who had sent her  “crispy tissues”.

This openness really is central to her success.  She never tries too hard.  She is herself, and she is loved for that.

Adele, then, is the singer for the social media age, because nowadays, it’s hard for stars to be aloof pedestal-climbers who stand apart from their audience. She is one of them, and she shows and tells them that’s the case, resonating with truth and honesty and reflecting their emotions with her words and her voice. For her, being herself comes easily, and it is her straightforwardness, her willingness to be outspoken, her unselfconsciousness and truth to her roots that mark her out.

That, of course, along with a beautiful voice and extraordinary songwriting talent.