Across the Seven Seas: an interview with Adam Walker

Home Across the Seven Seas: an interview with Adam Walker 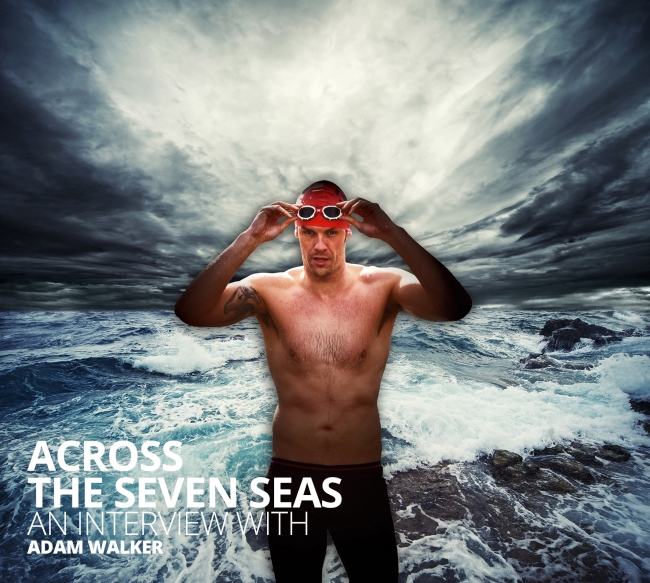 Crossing the seven seas used to be something restricted to pirates and explorers. Open-water swimmer Adam Walker decided that he could too… Bernardo Moya talks to him about his adventure.

Apart from the obvious dangers of drowning, cramp and pool-chemicals turning your hair green, swimming doesn’t immediately leap to mind as a dangerous sport. That is, until you consider long-distance open-water swimming. This is where athletes of near-superhuman capabilities conquer massive distances whilst contending with distances with freezing temperatures, ocean swells and even stinging jellyfish.

These athletes are considered the elite guard of the swimming world, pushing themselves beyond human endurance levels. Yet, even within these ranks, there are a special few who have gone even further. Adam Walker is one of those. He is the first British person and one of five people in the world to complete seven of the world’s most difficult swims.

“I just believed I could do it,” says Adam Walker. “What sets me apart from other people is my attitude. If you believe in yourself and have the right training you can do anything. So I just thought about the end goal. How it would feel to achieve such a feat. And I didn’t want to be remembered for being a salesman selling kettles and toasters.”

Becoming a swimming superstar was in his far-flung future after Adam finished his sports science degree and found himself in need of a job. He got involved in sales, the family trade, selling pet food, packaging, kettles, toasters and many other things.

He became interested in the Oceans Seven Challenge after watching the film On a Clear Day, which tells the story of a man who decides to reinvigorate his stagnant life by swimming the English Channel.

“It was strange,” he says. “I hadn’t actually swam for eight years at that point. That film just got to me. It was a fictional movie about an average guy who’d lost his job and decided to do the swim. It was one of those classic feel-good British movies. When it was over, I put my headphones down and said to myself, ‘I think I’ll do that. I think I’ll swim the English Channel with no experience.”

And so began the training…

He started by jumping into a local pool and see how he did. “I was coughing my guts up after an hour,” he laughs. “I didn’t have a coach but I just kept pushing myself. I kept going until I could do two hours, three hours and then eventually five hours in the pool. That’s when I realized that maybe I am capable of this. But, of course, you then have to get into colder water.

He went over to the local lake and dived into the 9°C water. For perspective on just how chilly that is, a cold bath is usually around 16/17°C. Brrr.

“I just thought, keep swimming until you can’t anymore,” he says. “I managed around 45/50 minutes. I started to hyperventilate at one point but just carried on. Long story short, severe hypothermia and five paramedics later, I started feeling human again. I was just so determined to overcome my barriers. But it was very dangerous and quite silly in hindsight. It made me resolve to do it properly under controlled conditions.”

He went to Dover and started training properly. It was a really testing time. Halfway through a six-hour training session, he started shivering uncontrollably, his nose started bleeding, vomited violently and developed a terrible headache. Despite this, he overcame the intense discomfort and finished his session.

“It’s just the way I am,” he says. “If there is a barrier in front of me, I will do whatever I can to overcome it and achieve what I set out to.

Less than a year later, Adam crossed the English Channel in 11 hours and 35 minutes. He then decided to tackle the Oceans Seven challenge. With the English Channel done, his next endeavor was the Gibraltar Strait between Europe and Spain. Of course, that wasn’t enough for him so he decided to swim right back again…

He then dodged tiger sharks and got stung by a Portuguese Man o’ War in Hawaii’s Molokai Straits, eventually completing the swim on the verge of paralysis within 17 hours. Later that same year, Adam swam over 21 miles in darkness across the Catalina Channel in California, crossing the last three miles with a torn shoulder. Next up was the Tsugaru Channel in Japan. The current here was so strong that he often remained stationary despite expending huge amounts of energy in moving forwards. He still managed to complete it within15 hours.

His next swim took place in the Cook Strait in New Zealand where he was actively hunted by sharks. Thankfully, a nearby pod of dolphins came to his aid, protecting him from the sharks until they lost interest.

“It was just the most incredible experience,” he says. “After the sharks disappeared, the dolphins stayed with me. They were playing and doing a few jumps before coming back to me. At one point they were all around me and were gently nudging me. When I had to stop for a break, they bobbed around in the water waiting for me. It was like I was part of the pod. I will remember it for the rest of my life.”

Already supporting the Make a Wish Foundation and Sports Aid, the experience spurred him on to support the Whale and Dolphin Conservation Society.

“It’s a cause I feel very strongly about,” he says. “They do fantastic work in preserving whales and dolphins throughout the world. I’m very opposed to whaling and I try and campaign alongside them for restrictions. It’s very dear to my heart.”

On Wednesday 6th August 2014, Adam became the first British person and one of only five people in the World to finish all seven of the Oceans Seven swims, swimming from Ireland to Scotland.

Despite the magnitude of his achievement, he won’t be resting on his laurels and is already thinking about the next challenge.

“I’m certainly not going to put my feet up in front of the sofa,” he smiles. “I don’t think I’m that kind of guy. I’m already thinking about the next swim. I would like to do a swim that no one’s ever done. I can’t say what it is yet. Top secret. I would also like to keep the flag flying for the Whale and Dolphin Conservation. It’s important to me to always be thinking about the next swim. Swimming has brought so much to my life. I have had life changing experiences and the swimming community is fantastic. I feel more at home I think in the water than I do on land. I love being with sharks, dolphins and other marine life. Most of all, I love the great challenge of it being you versus the sea. Are you capable of getting across? Will the ocean allow you to get across? Will you push through? I’ve shouted so many words to the sea in the past. ‘Come on! Give me a break! You’ve proven your point that you’re tough but I’m going to stay in here as long as it takes.’ Now and again the sea goes, ‘Okay, we had our little battle, I’ll let you in. ‘

One other victory is that Adam no longer has to work in sales. He works as a swim coach across the UK and Europe, focusing on improving performance through video analysis, psychological conditions and nutrition plans. He would like to make open water swimming more popular and believes that anyone can do it if they have the are dedicated enough. He sees it as having a devil and an angel on each shoulder.

“The devil’s always there,” he says. “The devil tries to say that you’re uncomfortable and convince you to get out of this mess. You have ignore him. It’s hardest during your first swim because it’s the first time you’re hearing that voice. I was sick probably 20 times in the first couple of hours. You need to think in terms of positives and listen to the positive angel on your other shoulder saying to you that you can do it – just one arm in front of the other until you get to the other side. Okay, it’s one arm in front of the other for 80,000 strokes but still…”