A winning profile: Alastair Campbell by The Best You

Home A winning profile: Alastair Campbell by The Best You 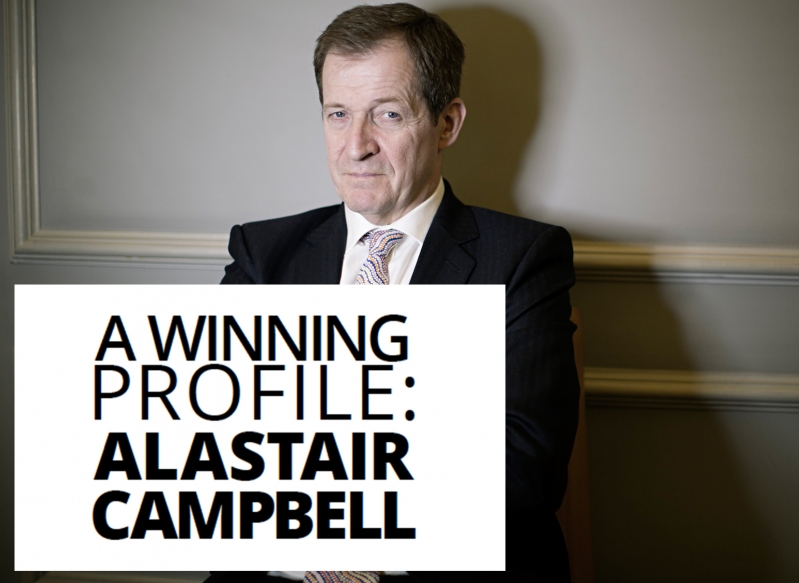 Alastair Campbell tells The Best You what drives him, the struggle with mental illness, the problem with education and the skills you need for success – plus how all those things are the drivers for his own passions

He’s the former ball-busting Downing Street press secretary renowned for ferociously defending his former boss, Tony Blair, with expletive-laden invective. He has been famously or infamously lampooned as Malcolm Tucker in the political satire The Thick Of It, and called a bully by at least one former Conservative Home Secretary. Whether he deserves these labels or it’s all part of the vicious cut-and-thrust of British political life, the man who visits The Best You’s studios to talk about his life, his inspirations and the qualities it takes to succeed is a very different figure from that tough-talker known for singeing even the most hardened journalists’ ears.

Quiet, thoughtful, charming and genuinely amiable, Alastair Campbell’s tall frame and piercing eyes reveal a little of the energy which got him through his former political role. There have been many other roles, too. From factory worker, to provincial to political journalist at the Daily Mirror, to business consultant and author of (at last count) ten books, Campbell has done everything in his life with dedication. His intensity also has its destructive side. He’s battled alcoholism and, in his words, “complete mental breakdown” along the way, and had the guts to talk about it when others would have wanted to hush it up.

It all started in Keighley, Yorkshire in 1957, where he was born to Scottish parents, his father from the Hebrides, his mother from Ayrshire. Early on, there was a drive in Campbell that pushed him on, even at school in Keighley and Bradford. He loved it.

“Neither of my parents are living but they always said they never ever had to get me to work, do homework all that stuff. I wasn’t a swot but I liked working,” he says with the pithy precision he’s renowned for.“

While some of his teachers, for example his German teacher, John Webster, were special and inspirational, others were average. Since education was so central to Labour policy when Campbell was in Downing Street, what’s his personal view of education?

For him, he confides, it’s the use of the word inspire.

“It is actually to make people want to love learning. I mean if anybody ever says to me, “You’ll look back on your schooldays as the best days of your life”, I think that is the worst possible message you can give to anybody because actually it should be preparation for better things ahead. I think one of the things I developed, at the various parts of my educational process as it were, was a sense of aspiration and ambition.”

Those traits expressed themselves in the willingness to challenge teachers. “I would ask them Why did they think that? and I would quite often find it was because they’d always done it like that and I would say, “Well, why do you do it like that? What do you think about doing it like this?”

When asked for advice by younger people now, he answers:

“Don’t underestimate the people above you but don’t overestimate them either and don’t think there’s anything wrong in aspiring to want to do what they’re doing but try and do it better.”

Campbell’s application and independent-mindedness got him into Cambridge to study modern languages. “I think I’m right in saying that I was the first kid from my school to go to Oxbridge. I didn’t like it much to be honest… I think that’s when my politics started developing really as I felt it was very elitist, very privileged, didn’t like it. But I… wish I’d done more when I was at university other than raging against the system the whole time.”

It also led to his political awakening. “Britain is actually quite a class-based country. We do tend to have this belief that if you’ve got the self-perpetuating ruling elite at the top things will work out for everybody else- and history suggests that is wrong,” he explains. He expresses sadness that even when kids from lower class backgrounds get into higher universities, they don’t have the swagger and self-confidence of kids who’ve been to “posh schools”. They needed to be taught confidence and resilience, he adds.

After leaving university with a 2:1, Campbell drank, busked, worked in factories and even got a job as a roulette dealer. Then, one day he applied for a job with the Daily Mirror.

It was a turning point. He was one of 12 selected from the 1,100 applicants to work on a scheme organised by the Daily Mirror. He met his wife-to-be on that first day, and they both asked to be placed at the Tavistock Times and then the Sunday Independent, a regional Sunday paper.

During a placement with the Daily Mirror, he was spotted and asked to stay on, eventually becoming a general reporter. In 1986, he was headhunted to become news editor at Today. The pressures proved too much. “In the spring of 1986 I had a complete, total psychotic meltdown,” he remembers. He was arrested and ended up hospitalised after a serious drink problem finally went out of control.

It was then his former Mirror boss stepped in, saying: “I did warn you… I told you it would be a disaster for you, you didn’t listen… Listen to me now, carry on taking the money while you’re sick and when you’re well, come back here.”

Campbell started again at the bottom, got psychological help and went on to become political editor. From there he went on to write speeches for a new politician, Tony Blair and after John Major was returned to power, realised he had to make a decision: was he going to help Blair get into Number 10 Downing Street?

In the next General Election, Campbell was instrumental in getting Blair into power. Once he’d done so, he had to make a decision about his history of depression.

“I just decided from the very first day when I got a phone call from a journalist saying I’m doing a piece about you and I’m doing a profile and I want to cover your breakdown and relationship with alcohol and blah de blah. I took the decision to be open and I’ve never ever regretted it. It’s one of the best things I ever did. I’ve never tried to say, ‘Listen that was then and this is now, it’s got nothing to do with who I am now’. I’ve actually said, ‘Yes that happened and I’ll tell you what – it’s been the making of me’.”

This is one of the things Campbell wants to be remembered for – his support for people with mental health issues. The fact that suicide is the number one killer of young men is a serious health issue in the country, and needs to be addressed. His campaigning is aimed at doing exactly that, and one of his main roles nowadays is raising awareness and charity work.

Campbell has also been in a position to meet countless successful people, and another side of his life has been to study them. He wants to inspire people to succeed, and counter some of the British press’s need to chop down people who’ve made it in life. That’s the reason behind his latest book: Winners and How They Succeed.

The book looks at winners in sport, business and politics and it tries to work out lessons that we can all take from that. “One of the motivations for writing it was my sense that I don’t think in Britain that we’ve quite got a wining mindset at the moment. I think a lot of it’s the way the media cover stuff, I think there’s just relentless negativity and I think it has an impact upon the public. I think we sometimes prefer failure to success in others.”

And success? How does that happen? Of course, there are countless parts to the mindset of success in the book, but one thing Campbell says sticks out:

“One of my favourite quotes in the book is from a guy called Colin Mcdonnell who’s an athletic coach in Kenya, he’s an Irishman who coaches Kenyan athletes, and he says, ‘The winner is the loser who evaluates defeat properly’. So we can learn as much from losing as we do from winning.”

It’s this turning a negative around – be it a class disadvantage, a mental illness, alcoholism – and learning from it, that is one of Campbell’s great skills.

Watch here Alastair Campbell interview at The Best You