A pitch in time: an interview with Paul Boross

Home A pitch in time: an interview with Paul Boross 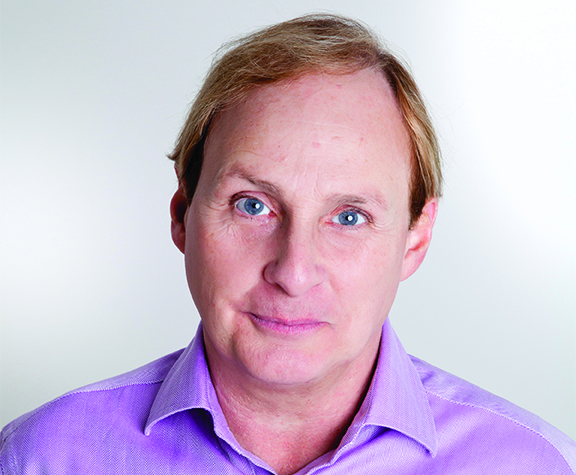 Bernardo Moya tracks the rise and rise of Paul Boross from tough State school to TV star and international speaker.

When it comes to upbeat attitude, Paul Boross has it by the barrowload. Perhaps his constant readiness to laugh and his freedom in conversation is explained by the fact that he regards everything he and, indeed, everyone does as a pitch.

For Paul, communication is a passion that started early at the state school he attended in south-west London.

“I loved English. I loved language, all kinds of language. I was in the debating society. I did all the plays. I didn’t really grasp science, but I loved every aspect of communication. ”

School also taught him other skills.

“It was a wonderful grounding for everything I learnt later, because a comprehensive school was 2,000 boys all shoved together. You got some of the smartest people you’ll ever meet and some of the stupidest there at the same time”, he reflects. “It made me have a natural instinct for people. I can tell what people are like at a hundred yards.”

“You know, a lot of comedians say that they learnt their comedy at school because they had to survive and not be beaten up. It works with psychology as well. You get to read people much better if you’ve come up through that system.”

Paul learned his upbeat attitude from his father. A Hungarian refugee who fled his home country during the 1956 uprising, he was an economist who (because of his bad English) had to work for two years as a waiter before managing to return to his profession.

“My father’s a huge inspiration for me because he is the person who always sees the positive spin on everything. He’s kinda got that, ‘it’ll be alright’ attitude. We’re talking about a man who, at 17, was thrust into the Second World War. In 1945 he entered Berlin with the Russians. Then was put in a Russian prisoner of war camp where for eight months – they used to take it in turns to pick the lice out of each other’s hair. He tells it like it’s a funny story. Like it’s easy. I sometimes, in lectures, tell stories about my father, who has been through all these hardships but still walks through life going, ‘I’m lucky.'”

He smiles. “He says, ‘I’m lucky’ in the sense that when other people were lined up and shot, he was one of the people who wasn’t shot. I think that’s coloured my attitude. Most people who I deal with, even at the lowest levels, are still luckier than 95% of the world’s population.

They say that belief in luck creates luck, and after studying in California, Paul returned to the UK, working as a film extra. He met comedian Tony Hawks, and together they formed a musical comedy act, a band called Morris and the Minors. Later, he had a minor hit with Ainsley Harriott, who later became the host of ‘Ready Steady, Cook’.

With his insight into psychology, performers came to him for help.

“One day, a very famous person came up to me and said, ‘I’ve completely lost my confidence. I can’t go on stage anymore.’ He had a live television show from a theatre next week. I didn’t know what to do.”

Paul looked for someone who could help him. The person he found was Garner Thomson, an NLP Practitioner.

Garner cured him of stage fright within one session. It was a turning point. Paul embarked on NLP training.

“I was astonished at this knowledge that was so much more practical than anything I’d ever learnt in psychology before. So I owe a lot to him for teaching me that.”

Having learnt the skills of stagecraft from the likes of Tony Hawks and comedians such as Paul Merton and Jo Brand, Paul decided to combine his skills in psychology and NLP with performance. He decided to specialise in teaching others about pitching and performance. The idea for The Pitch Doctor was formed.

“The thing that people don’t understand is that a lot of performance is what’s going on in your head. It’s also what’s going on in the head of the person you’re talking to, or the audience you’re talking to. I think, up until recently, people thought you could teach people how to perform and present by just going, ‘Stand up straight. Look the audience in the eye. You know, think good things’ whereas I get much more into the psyche of the person. What are they thinking? What are they saying to themselves? How do they view the audience? So The Pitch Doctor brand is really about melding those two sides.”

While there are skills required to change the audience’s state to bring them with you – a skill Paul learned in the comedy clubs and for which he rightly admires NLP co-creator Richard Bandler – there are also the basics of public speaking.

“What surprised me when I first started was how many people were just frightened of standing up, and this included people at managing director and CEO level. People are just scared of standing up. It’s still the number one fear in the world.”

Recently, Paul has taken his presentation skills and confidence-building to television.

“I do a show on Sky called School Of Hard Knocks, where we take a group of young unemployed men and turn them into a rugby team. I do all the psychology with them and get them ready for the communication aspect of getting a job at the end of the series. Now, I go to them, ‘You’re lucky because, you know, some people don’t have the opportunity to even go for a job, or even sort of get some training, or even eat regularly in the morning.’ So it’s all about perspective of where you are. What I say to people is, ‘Think of what you have’ – and what we have is so fortunate compared to the majority of the world.”

As well as TV, Paul makes keynote speeches, trains CEOs to make speeches, helps advertising agencies make their pitches and basically gives advice on the art of pitching to all comers.

With his genuine interest in others and his desire to help them be more themselves, Paul Boross is making a difference. It’s something he’s genuinely proud of.

“When somebody comes back to me years later and they say, ‘You know that bit of work we did? Well, I managed to get a job as a result of that and I took my family out of poverty. Now my son is going to university and he can get a job because of what I learnt.'”

He sums up his approach to life: “That you help one person and then the ripples keep on going. The legacy should be that in generations’ time, somebody you helped, their children’s children’s children are much better off as a result of you touching that one life.”

Paul Boross At A Glance