A Lesson In Catching Affluenza by Gill Fielding

Home A Lesson In Catching Affluenza by Gill Fielding 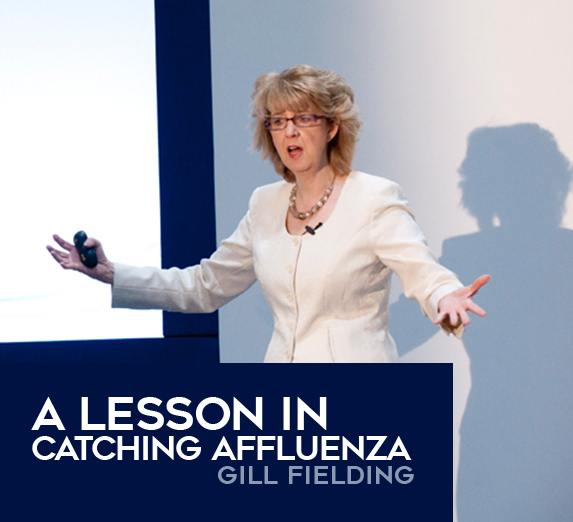 Gill Fielding is a woman on a mission, and that’s to spread financial savvy and wealth-making potential to as many people as possible. She calls it affluenza – and her talk at The Best You Expo was highly contagious

When Gill Fielding was a little girl, money was a dirty word. Growing up in the East End, not far from where The Best You Expo was held, her mum used to tell her: “Nice girls don’t talk about money.”

It was part of an anti-money culture, which branded money “filthy lucre” and people who were wealthy as “fat cats”.

Her big observation, as she went on to understand money and how to make more of it, was how illiterate most people are about it. To prove her point, she revealed that a staggering one in four people who took money out of their pensions under the new government pension scheme put it into cash.

Fielding told a story demonstrating how her attitude to money works. She put aside £2 a day for each of her children when they were born, paying the cash tin into equities every month. With an 11 per cent return, by the time her children had reached adulthood, they already had a good pot of cash – tens of thousands of pounds – to invest in the next stage of their financial life. In fact, she pointed out, if you put away just two pounds a day for your entire life, by the time you retire, you will be a millionaire. A chastening lesson to anyone interested in knowing how money grows from itself over time.

Part of the problem with the nation’s poor education about money is that many people hold plenty of prejudices and wrong preconceptions about being wealthy. At the extreme end of this attitude are the “anti-money thugs” who want to keep everyone down, thinking that money is evil.

Fielding demonstrated her particular attitude to money. The television series, The Secret Millionaire, gave her the opportunity to do exactly that. In the show, she was taken back to her roots, working as a cleaner in a café, and given £10 spending money per day.

She was thrown back on her resourcefulness. “I would say to the café owner; if I clean the toilets can I take an egg and a piece of bread pudding and a newspaper so I started to barter so I could keep hold of my cash.”

At the end of ten days, she’d managed to save £82.60. As an experiment, she kept up that level of investment and then worked with that money.

“I proved that starting from the gutter on the statutory minimum wage per day I can make myself a millionaire again. It took me about four years.”

“Did I have any starting capital? No. Equipment, iPhone, Blackberry? No. Did I have access to the internet, my laptop? No I didn’t. I had none of those things, I only had two things and they were what I had in my head – my knowledge, my information; and what I had in my heart, which was my belief that I could do it and that it was possible for me.”

It’s this knowledge, this savvy attitude to money that her business, Fielding Financial gives to its students. “Most of our students in Fielding Financial do it much quicker than four years, because they’re not starting at the gutter,” she added. “And nor are you.”

The aim of her work is to provide her students with complete financial independence. In that way they get to live longer and have more fulfilled lives in which they are not on the wheel, chasing after the next pound.

Her way, and she admits it is only one way of many, is to make smart property investment deals. She gave the case of her daughter who, while at university at Royal Holloway College, bought a house with the help of a business angel.

She converted the two-bedroom house into a five-bedroom house, and let the rooms to college friends. She kept the house after leaving university, and now has an income of £1,100 per month coming in from it.

Other deals offer great returns, simply by spotting the potential in a building or a site, and adding value to it by rebuilding or extending. She runs courses showing people exactly how to do it, and provides investment opportunities for her students to give them real financial freedom.

Fielding’s expertise was indeed contagious, with many people very excited by the opportunities she offered. We look forward to seeing how people do, in the coming years.

Who will be The Best You Expo’s first millionaire?