40 quotes from Zuckerberg, the face of facebook by The Best You

Home 40 quotes from Zuckerberg, the face of facebook by The Best You 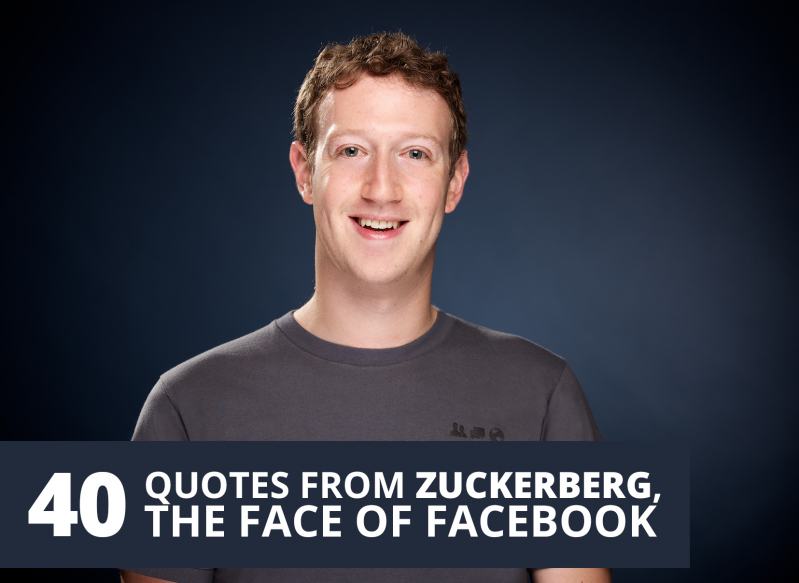 At The Best You magazine, we’ve gathered 40 of the best quotes from the genius who created Facebook – and who changed the way the world talks.

1. The biggest risk is not taking any risk… In a world that changing really quickly, the only strategy that is guaranteed to fail is not taking risks.

2. Think about what people are doing on Facebook today. They’re keeping up with their friends and family, but they’re also building an image and identity for themselves, which in a sense is their brand. They’re connecting with the audience that they want to connect to. It’s almost a disadvantage if you’re not on it now.

3. Move fast and break things. Unless you are breaking stuff, you are not moving fast enough.

4. I look at Google and think they have a strong academic culture. Elegant solutions to complex problems.

5. Advertising works most effectively when it’s in line with what people are already trying to do. And people are trying to communicate in a certain way on Facebook – they share information with their friends, they learn about what their friends are doing – so there’s really a whole new opportunity for a new type of advertising model within that.

8. No one has done a study on this, as far as I can tell, but I think Facebook might be the first place where a large number of people have come out. We didn’t create that – society was generally ready for that. I think this is just part of the general trend that we talked about, about society being more open, and I think that’s good.

9. Facebook is really about communicating and telling stories… We think that people can really help spread awareness of organ donation and that they want to participate in this to their friends. And that can be a big part of helping solve the crisis that’s out there.

10. My goal was never to just create a company. A lot of people misinterpret that, as if I don’t care about revenue or profit or any of those things. But what not being just a company means to me is not being just that – building something that actually makes a really big change in the world.

11. When you give everyone a voice and give people power, the system usually ends up in a really good place. So, what we view our role as, is giving people that power.

13. In terms of doing work and in terms of learning and evolving as a person, you just grow more when you get more people’s perspectives… I really try and live the mission of the company and… keep everything else in my life extremely simple.

14. By giving people the power to share, we’re making the world more transparent.

15. I think a simple rule of business is, if you do the things that are easier first, then you can actually make a lot of progress.

16. Back, you know, a few generations ago, people didn’t have a way to share information and express their opinions efficiently to a lot of people. But now they do. Right now, with social networks and other tools on the Internet, all of these 500 million people have a way to say what they’re thinking and have their voice be heard.

17. Facebook is uniquely positioned to answer questions that people have, like, what sushi restaurants have my friends gone to in New York lately and liked? These are queries you could potentially do with Facebook that you couldn’t do with anything else, we just have to do it.

18. All of my friends who have younger siblings who are going to college or high school – my number one piece of advice is: You should learn how to program.

19. I think that more flow of information, the ability to stay connected to more people makes people more effective as people. And I mean, that’s true socially. It makes you have more fun, right. It feels better to be more connected to all these people. You have a richer life.

20. Facebook was not originally created to be a company. It was built to accomplish a social mission – to make the world more open and connected.

21. The thing that we are trying to do at facebook, is just help people connect and communicate more efficiently.

22. The question isn’t, ‘What do we want to know about people?’, It’s, ‘What do people want to tell about themselves?’

23. A squirrel dying in front of your house may be more relevant to your interests right now than people dying in Africa.

24. Our goal is not to build a platform; it’s to be cross all of them.

25. People have really gotten comfortable not only sharing more information and different kinds, but more openly and with more people – and that social norm is just something that has evolved over time.

26. There is a huge need and a huge opportunity to get everyone in the world connected, to give everyone a voice and to help transform society for the future. The scale of the technology and infrastructure that must be built is unprecedented, and we believe this is the most important problem we can focus on.

27. I updated my grilling app, iGrill, today and it now has Facebook integration that lets you see what other people are grilling right now around the world. Awesome.

28. Mobile is a lot closer to TV than it is to desktop.

30. My friends are people who like building cool stuff. We always have this joke about people who want to just start companies without making something valuable. There’s a lot of that in Silicon Valley.

31. I actually do think you’re seeing this trend towards organizations just caring more about their brand and engaging. And so I think Home Depot will want to humanize itself. I think that’s a lot of why companies are starting blogs, are just giving more insight into what’s going on with them.

32. I got my first computer in the 6th grade or so. As soon as I got it, I was interested in finding out how it worked and how the programs worked and then figuring out how to write programs at just deeper and deeper levels within the system.

34. Right now, with social networks and other tools on the Internet, all of these 500 million people have a way to say what they’re thinking and have their voice be heard.

35. For the first time we’re allowing developers who don’t work at Facebook to develop applications just as if they were. That’s a big deal because it means that all developers have a new way of doing business if they choose to take advantage of it. There are whole companies that are forming whose only product is a Facebook Platform application.

36. I think that people just have this core desire to express who they are. And I think that’s always existed.

37. I mean, we’ve built a lot of products that we think are good, and will help people share photos and share videos and write messages to each other. But it’s really all about how people are spreading Facebook around the world in all these different countries. And that’s what’s so amazing about the scale that it’s at today.

38. I don’t have an alarm clock. If someone needs to wake me up, then I have my BlackBerry next to me.

39. The real story of Facebook is just that we’ve worked so hard for all this time. I mean, the real story is actually probably pretty boring, right? I mean, we just sat at our computers for six years and coded.

40. We want Facebook to be one of the best places people can go to learn how to build stuff. If you want to build a company, nothing better than jumping in and trying to build one. But Facebook is also great for entrepreneurs/hackers. If people want to come for a few years and move on and build something great, that’s something we’re proud of.