Standing Out From The Crowd by Paul Boross

Home Standing Out From The Crowd by Paul Boross 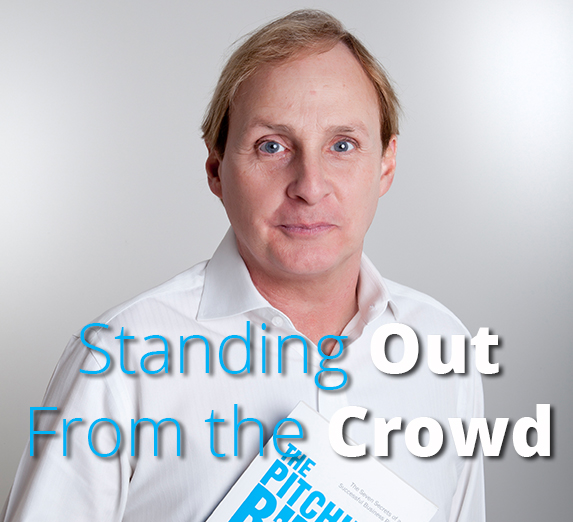 In my work as The Pitch Doctor, one of the most common questions that comes up is “How do I make myself memorable?” Visit ThePitchDoctor.tv

Put yourself in someone else’s shoes for a moment. What makes other people stand out to you? Who is the most memorable person you have ever met? And most importantly, why were they memorable to YOU?

A quality that makes you memorable is most definitely in the eye of the beholder. What is memorable to you is background noise to someone else. So therein lies our first problem.

Your challenge is actually not to stand out from the crowd, but to be aware of what you are memorable for. You want to present ‘the best you’, but you can’t help all the other versions of ‘you’ being presented too!

I heard someone talking about leadership recently, and he said that he had approached Sir Richard Branson at a charity event and asked to interview him for a book. Sir Richard asked, “What will make your book different to all the others that are out there?” and the guy replied, “Erm, I don’t know. You’ll be in it?”

He didn’t get the interview. And the reason? It wasn’t because his answer was lame and ill thought through, even though that was true. It was because the guy couldn’t differentiate himself. In the words of Dash from The Incredibles, “When everyone’s special, no-one is”.

Psychologists tell us about the principles of ‘primacy and recency’, where our first and most recent experiences stand out to us most strongly. So that would tell you to be the first to do something. But history is littered with examples of people who were first, but were the first to fail. Being a successful second is often preferable – in fact if you look at TV talent shows, it’s often the runner-up who has the more commercially successful career.

My overall advice to you is therefore to stand out from the crowd by not trying to. Don’t try to be different. Don’t try to be louder or brighter than your competitors. Focus on the one person you want to impress and just be yourself. Be honest, open and sincere. Tell them why you want their attention, and why you deserve it. You don’t need to be confident, because the nervous energy that you build up to achieve confidence easily spills over into arrogance, and that’s a guaranteed turn-off.

We live in an increasingly competitive world. More people compete for fewer resources. Employers compete for the best candidates, and the best candidates compete for the best jobs. A world of information is at everyone’s fingertips, levelling the playing field. Employers no longer have to rely on what’s in your CV or what a recruiter says about you, they can see your entire life story, laid out in social media updates, holiday photos and even in what you have written about other people.

Today, the instant a recruiter sees your name, they’ll look you up online. If you doubt the importance of social media then let’s look at the research from Bullhorn Reach; 98 per cent of recruiters use LinkedIn, 42 per cent use Twitter and 33 per cent use Facebook.

And when the recruiter visits your profile, they’re not just seeing what you want them to see, they’re seeing everything that you have ever posted; every status update, every joke and every embarrassing photo.

And, crucially, they’re seeing everything that you’ve ever said about anyone else. Consider the story of Connor Riley who, in March 2009, was offered a job at Cisco, one of the world’s largest Internet companies. She immediately Tweeted, “Cisco just offered me a job! Now I have to weigh the utility of a fatty paycheck against the daily commute to San Jose and hating the work.”

So what’s the right message for your first impression? Be bold, clear and concise. Make an opening statement that clearly positions who you are, why you’re valuable and the role that you’re best suited for.

What you’re essentially saying is:

I really want to meet you

I really want to be remembered by you

My final piece of advice for you is this…

Paul Boross, aka The Pitch Doctor, is the world’s only presentations and pitch specialist, business trainer and life change expert with 25 years of front-line experience of both motivational psychology and high profile work in television, stage, music, comedy and the corporate world.

As an internationally acclaimed authority on communications, presentation, performance and pitching skills, he has worked with leading business people, politicians and performers on the art and science of ‘getting the message across’.