The Creative Entrepreneur: an interview with Michael Jacobsen

Home The Creative Entrepreneur: an interview with Michael Jacobsen 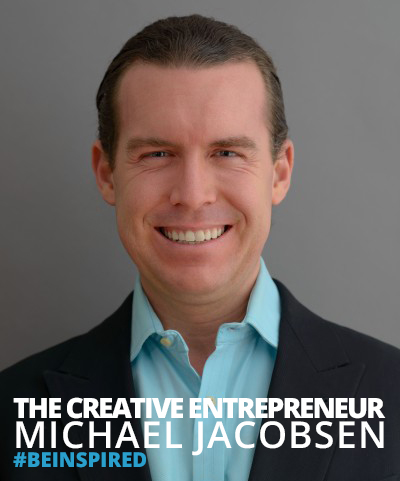 Michael Jacobsen tells The Best You about his brand of entrepreneurship. Although the millionaire businessman comes from a showbiz background (his father promoted large-scale concerts in Australia when Michael was a boy), his first calling was business.

Strongly influenced by a teacher at school who was also a successful businessman, Michael Jacobsen sought his advice when he found himself struggling for money at university. He was soon trading shares and monitoring his profit margin while attending lectures. No surprise that, after university, he went on to pursue a full-blown career as a stockbroker.

His exposure to company reports and meeting numerous people from big business boards gave him an insight into the deep workings of business. He had a skill for making money easily, but, after four years, he realised he was also a people person. So he turned himself from a stockbroker into an entrepreneur. As a ‘business angel’ he realised his family’s entertainments business was a great place to invest.

Ten years ago, he bought the rights to Dirty Dancing, scoring a worldwide hit with the show. Pre-performance sales for the London show were the highest on record, and, after a decade, Dirty Dancing continues to play to full houses in London’s West End.

Today, Michael and his family also run numerous entertainment venues across Southeast Asia, many of which they built themselves, from 2,000 to 30,000 seaters.

Never one to stay still, he brings his boundless energy and vision new ventures. He has published a book, The Business of Creativity, which reveals how to combine entrepreneurial spirit with the arts. He also recently founded the Global Entrepreneur’s Academy which helps overseas entrepreneurs enter the London business scene.

Michael and his companies have also been involved in promoting concert tours featuring performers like Elton John, Bruce Springsteen and Barbra Streisand as well as Fame The Musical and Disney Productions including The Lion King.

So what makes an entrepreneur?

“Generally I think with every entrepreneur I’ve ever met, be they small, medium or large, they’re not doing it for the money. They’re doing it because they’ve got a vision and a passion. Using those two things to create a product or service which is adding value to somebody’s life, then that becomes magnetisable”, he says.

In many ways, he sees the entrepreneur as the person who lights the fire then leaves it to others to tend.

For him, the entrepreneur is central to the success of a country.

“Entrepreneurs give rise to small business, which in just about every economy around the world – certainly the UK and most other western economies – small businesses is the life blood of those economies. It’s not the big businesses, you know, half of which pay tax offshore with ridiculous complicated arrangements. It’s the people who are doing the hard yards every day; they’re the nuts and bolts of most economies.”

So, having moved to the UK from Australia, does that mean that ‘UK plc’ is a good place to do business?

“To me, the UK is certainly one of the hotbeds of entrepreneurialism in the world. There’s enormous support and enormous resources available, from government levels and all different private, public and social enterprise.”

In fact, for Michael, London is more than a place to do business. It’s also a place where his people skills swing into play.

“What strikes me is that, certainly for me who loves business and loves dealing with entrepreneurs, being able to be in this market and work with an advisor, sit on boards and talk to entrepreneurs, it’s like being in Disney Land. Because you can really just engage with people, engage with their businesses, hear their stories.”

And what of their stories? Michael is fascinated by hearing how entrepreneurs decided to leave their jobs to fulfil their dreams, or how they’re holding down a job to get an idea off the ground after hours and managing their life at the same time.

“All of these things are just not easy. It’s a lot easier to go and get a good job, get a salary and go home at 5 o’clock and just have a happy life. It’s easier, but if you’re an entrepreneur, that’s not an option. There is only one option in your life and that’s to do what came into your mind and what came into your heart, whatever that idea is. It’s like an athlete running a race or an actor or anything else, where you’re dealing with people with extreme passion”, he says.

He compares the hard graft of the entrepreneur with the same dedication and mental tuning put in by Olympic athletes:

“It’s the same with entrepreneurialism. There’s a long journey, and it involves a lot of psychology and business, particularly at the early stage. But even at the later stages, there’s so much psychology involved in it, and getting your head around things, and having the right mindset, and the right frame of mind.”

Drop that mental framework for even a moment and you can find yourself overwhelmed by bills, meetings, a tidal wave of emails and admin while you’re trying to innovate. “All these things just can become too much”, he says. “People can get consumed by negativity and then they don’t perform. So it’s a hard journey for entrepreneurs.”

Thankfully, in the UK, Michael says that the Government is extremely supportive of business. It makes a difference and means that, for those seeking to start up who’ve maybe been made redundant or are fresh out of college, now is a great time.

So, besides vision and passion, what advice does he give those wanting to start out in business? The first thing is to get others involved, especially to attract resources and know-how.

Another piece of the jigsaw is to get advice.

“If you can’t afford advice, that’s fine. Go to a government agency or to a social enterprise or to Startup Britain and get free advice. You can find an uncle who’s got a business, who sold a company, or a long lost auntie who knows something about business. But you’ve got to get some sort of advice, some sort of sounding board.”

Picking your adviser is important. They have two main roles, Michael explains:

“It doesn’t have to be somebody who is an expert on everything, because nobody is. Someone to bounce ideas back and forth; someone who’s gonna give you a sanity check about your ideas, but also give you positive support and encouragement. It’s terribly difficult to sit in your home, in your kitchen, or in your garage, or in Starbucks or wherever you want to sit just with your laptop and create.”

And, as Michael said from the start, as a “people person” he knows the power of collaborating with others.

“Creating is not a singular thing. The innovation comes out of your mind, but ultimately you’ve got to get that energy out there and bounce it around with other people—at least one other person to really start to manifest that into a business.”

Michael Jacobsen at A Glance