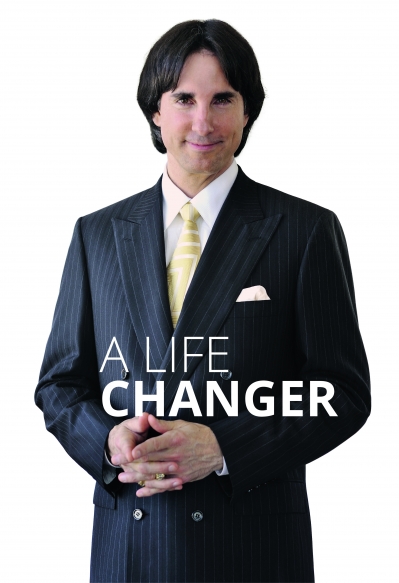 Widely acclaimed as a public speaker, teacher and author, John Demartini is a genuine force for good. So why was he once told he would amount to nothing? And how did he overcome dropping out of school, disability and a near-death experience to help others find their authentic selves? Bernardo Moya reports

You may have seen him in the 2006 personal development movie The Secret or picked up one of his books, including titles such as The Breakthrough Experience, Riches Within and How To Make One Hell Of A Profit and Still Go To Heaven. It’s possible you’ve attended one of his many talks delivered around the world, or had your life transformed at one of his seminars. Or maybe this is the first time you’ve heard about this extraordinarily positive figure who has helped change many lives for the better.

Born in Houston, Texas in 1954, John Demartini didn’t have life’s advantages so many take for granted. A birth defect gave him misshapen limbs, forcing him to wear arm and leg braces at an early age. He also struggled in classes so that when he was just seven, a teacher told him he would never be able to read, write or communicate effectively. Diagnosed with dyslexia, by 14 he was a high school dropout, begging and sleeping on the streets.

Strangely, he doesn’t regret those days. “I had a desire to be free and I guess I’ve been a free spirit ever since,” he smiles. Which may explain why he decided to hitch to California, then Hawaii to become a classic 1960s surfer, sleeping on the beach. Life didn’t match up to the hippy dream though, and at 17 he ate a plant he found on the beach whose high strychnine levels nearly killed him. It was the low point of his life, and was also the point where things began to change. “I was luckily led to a little health food store which then led me to an evening event that was presented by Paul C Bragg,” he recalls. “One night, one hour, one man with one message got to me.” The effect of Bragg’s talk was profound. “That night was the first time in my life I believed I might be intelligent and that I might do something with my life – right after I nearly died.”

It sounds like a ‘born again’ story – and perhaps in some ways it was, because Demartini’s life completely altered right then. “That night I made a decision that I wanted to learn how to read, be a teacher, travel the world and do my best to learn everything I can and teach as much as I am able.”

His desire was realised over the coming months as he learned he could read and become who he wanted to be. “I didn’t read till I was 18, and once I learned that I could, I became a bookworm,” he says. In fact, he couldn’t stop, reading dictionaries, encyclopaedias – everything he could. For his nineteenth birthday he asked his mum to give him, “the greatest teachings on the face of the earth, the greatest writings humanity had ever created.”

Grinning, he recalls she replied, “Okay… can’t you ask for a t-shirt?” Thankfully, his uncle was a professor at MIT and John says he was “blessed” when he received from him two six-foot-cubed wooden crates filled with, “thousands and thousands of books in every imaginable field.” It was an extraordinary gift that was to deeply influence John.

“I just started working. I’ve been studying Nobel prize winners and great philosophers and great scientists and great theologians and business leaders and anything to do with maximising human awareness and potential,” he says. The effect on him to this day is profound. “I constantly read, sort, study, research and summarise, write books on it and do everything I can.”

Today he delivers 350-400 speeches a year, gives about 1,000 interviews and spreads the Demartini message as widely as he can.

So what is his message? The answer is inspirational: “There is a hidden magnificence in everybody and if they follow the principles that help people wake it up, they get to do something extraordinary with their life.” He also adds: “I’m very, very inspired by doing what I can to help people do that every day in my life.” As I ask him to outline what he teaches, he adopts a thoughtful tone. “I think that everybody lives by a set of priorities, a set of values in their life.

Whenever they’re setting goals that are congruent and aligned with their highest values, they’re spontaneously inspired from within to act. But whenever they’re doing goals or intentions that are lower on the value list they tend to procrastinate, hesitate and frustrate.” He outlines a common story: how we start off in life subordinating our own values to those of others. Perhaps we have a set of values imposed on us by parents or teachers – and later in life by our bosses at work. The upshot of this, Demartini says, is that many people are not living a life that is congruent with their true sets of values.

The result of this is that life is hard – a struggle, and full of frustration. But for many over time, this begins to change as they become more self-aware. “Around our 30s to 40s, maybe mid-life, we start to realise, ‘wait a minute now, we’ve been subordinating and been living by the injections of other people’s values…we haven’t given ourselves permission to live authentically and congruently with our own’.” He continues: “We finally get to a point where we go, ‘you know what, enough’s enough. I want to be me, I want to be loved for who I am, I want to do something that’s inspiring, I want to make a difference’.” He looks at me with a glittering eye. “We’re not here to live in the shadows of anyone, we’re here to stand on the shoulders of giants. The moment we give ourselves permission to be our authentic selves and not subordinate, we do something extraordinary.”

Standing on the shoulders of giants is indeed what John Demartini has been doing for most of his life. He approached the books his uncle sent him at 19 with logical precision. “I wanted to study the laws of the universe and I wanted to study the greatest thinkings, the greatest ideas I could get my hands on… I made a list of all the disciplines that were available in the dictionary and the encyclopaedia at the time and I then set out, I said, ‘Okay, I want to have an average of a hundred books on each topic’.”

He determined 292 different disciplines, and he did indeed read a minimum of 100 books on each. “I wanted to learn the most universal law I possibly could get, because if I found the same law applying to all those different disciplines I’d have the strongest foundation to build my teachings from.” By finding the common threads in so many different and truly original minds he woke up his own original thinking. It also helped him see things more clearly. “We have to transcend all the ideals and some of the fantasies we grow up with and finally get grounded and real about what’s really going to be important to our life and the priorities in our life.”

So how do you work out what your priorities are? How do you really discover what drives you rather than what you’re told drives you. Demartini’s answer really makes me think. “Everybody’s life demonstrates their values. You can say all kinds of things about what’s important to you but your life demonstrates it. I’ve been asking people for many, many decades now about their values and I’ve adopted a value determining process.“

Demartini goes on to list a whole series of determinants of values. For example, people fill their space with things that are valuable to them. “If it’s very important to you, you keep it around you; you want to see it or hear it or be around it. You look at what’s close in your personal space.” From here, he also lists other factors, such as time spent on things, energy, money, order and organisation, then discipline and a series of further factors, making 13 in total.“ If you look at all those and you answer three answers to each one you’ll get 39 answers and then you’ll look at which one of those answers keep repeating themselves the most, second and third – and you then discern what it is: the hierarchy of one’s values.” You can then begin to organise your life around the most important values and delegate the rest.

“As long as you’re doing lower priority things you’re going to be draining yourself and not performing at your peak,” he says. The exercise helps people to determine the direction in their lives as they become more self-aware. The effect of living to your highest values isn’t only psychological. There is a neurophysiological element, Demartini explains. “Whenever we are living congruently with our highest values, we activate what the ancient Greeks called the Telos, the end in mind. We also activate the Telum Cephalon, the end in the brain, which is the medial prefrontal cortex. The moment we do, the telomerase enzyme is enhanced because of the stress reduction.

“It elongates the telomeres, which actually helps you live longer. The physiology is trying to guide us to be authentic. When we actually live authentically, we’re rewarded by more vitality, more inspiration. “We’re actually getting to a timeless mind and in that state we can have a great state of resilience and less ageing.” The secret, then, is to see beyond the immediate whim, fantasies, selfdelusions and external values we are subordinated to in order to become one with ourselves and the wider universe.

Demartini explains that when we do, we find life becomes a joy – and deeply fulfilling. It is this message that he spreads in his talks and seminars throughout the world. It has helped thousands, perhaps tens of thousands to find a better life. It’s quite a life, and quite a story. And it all started on a beach in Hawaii, where a young, lost man nearly died.